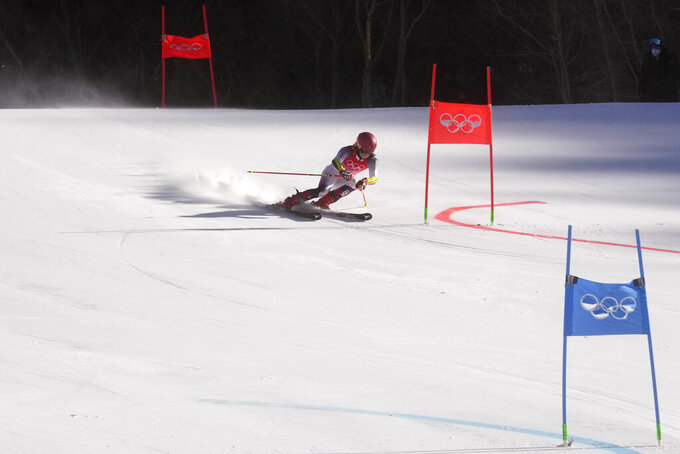 BEIJING (AP) — Mikaela Shiffrin skied cleanly through the finish line four times Sunday. At the bottom of the parallel course, she hugged teammates and huddled with them under a bed comforter for warmth.

The Austrians won, and the Americans ended up off the podium. But after such an exasperating Olympics, the moment was good as gold for Shiffrin anyway.

“It’s the most special feeling, the most positive and optimistic feeling that I’ve had for this whole time that we’ve been here,” she said.

Shiffrin and the American mixed ski team missed out on a medal by 0.42 seconds, losing in the bronze matchup to Norway on Sunday. The narrow loss meant the two-time gold medalist would leave China empty handed, but after crashing out several times at the Beijing Games, Shiffrin was riding high from a strong U.S. showing.

“I have had a lot of disappointing moments at these Games, today is not one of them,” Shiffrin said. “Today is my favorite memory.”

The top-ranked Austrians won gold in the Winter Games' second iteration of the mixed team parallel event, holding off Germany in the final.

The U.S. used Shiffrin on the slower of the parallel courses, and she lost three of her four heats, including in the bronze matchup against Norway. Teammate River Radamus delivered the win the U.S. needed in the last heat to force a 2-2 deadlock, but he wasn't fast enough to tilt the tiebreaker — combined times of the fastest man and woman — to the Americans' favor.

“River, I mean, we're watching you at the bottom there, and the fact you're skiing so strongly, you're giving us hope, that's the biggest win you could give us,” Shiffrin said to Radamus.

Shiffrin went 0 for 5 in her bid for an individual medal in Beijing. She only reached the finish line at two individual events, coming in ninth in the super-G and 18th in the downhill, her two worst contests. She lasted about five gates in giant slalom, five gates in the slalom and 10 in the slalom portion of the two-leg combined.

“I would say that my teammates are what carried me through this Olympics,” she said. “I just want to say thank you for that.”

The 26-year-old Shiffrin easily managed the giant slalom course in the first round and beat Slovakia's Rebeka Jancova — one of few victories by skiers on the slower red course all day. Radamus and Paula Moltzan won their heats by even larger margins as the U.S. advanced.

Shiffrin lost her quarterfinal race from the red slope against Italy’s Marta Bassino by 2 hundredths of a second. The sixth-seeded Americans still advanced with a 3-1 upset of the third seed.

In the semis, Shiffrin was narrowly beaten by Germany’s Lena Duerr. Tommy Ford was unable to win from the red course in the final heat, dropping the Americans into the bronze match.

“I don't think you can emphasize enough how unbelievable it is for us to be here and be in the hunt for a medal,” Shiffrin said. “I get that people will say we came up short, but the thing is, to have this depth on our team coming from the U.S., competing in a European dominated sport ... it was unbelievable.”

Austria also tied in the final against the Germans, but Stefan Brennsteiner and Katharina Liensberger took their heats in a faster combined time than Duerr and Alexander Schmid. Austria won silver in the event’s debut at the Pyeongchang Games four years ago.

Austria's Johannes Strolz also won the individual combined and took silver in slalom, giving him three medals in Beijing a year after he was cut from the country's roster.

“I am just very, very thankful and happy to achieve this with my team,” he said.

The mixed team event was postponed a day after gusts at up to about 40 mph (65 kph) kept skiers off the slopes Saturday. Shiffrin and most of the U.S. team had been scheduled to fly out of China early Sunday but changed their plans to remain in the team event. Many skiers were likely eager to depart with the World Cup circuit resuming next weekend, with the women in Switzerland and the men in Germany.

“There was aboslutely some thought that the 24 hours makes a difference to still be like, pushing and using that energy,” she said. “And I decided to stay because I wanted to compete with my teammates.”

Conditions were slightly calmer Sunday, with gusts reaching around 30 mph (48 kph), but temperatures dipped to minus 3 degrees Fahrenheit (minus 20 degrees Celsius). Skiers gathered at the bottom of the course in white comforters they apparently brought from their rooms.

The mixed team event has drawn little interest from the sport's top skiers, both because of they don't love the format and because it's so close to the end of the Games. When mixed team debuted in 2018, 15 of that year's 23 individual medal winners skipped it, including Shiffrin.

This year, Strolz was the only one of Alpine's 10 gold medalists to participate. Only 15 teams even entered, so No. 1 seed Austria got a first-round bye.

“There's things to work out with the logistics of this event,” Shiffrin said. “There's still things that need to be worked out, but I think we were all so excited to compete together. It's not something you get very often.”