Spanish skier could spring a surprise in Olympic downhill 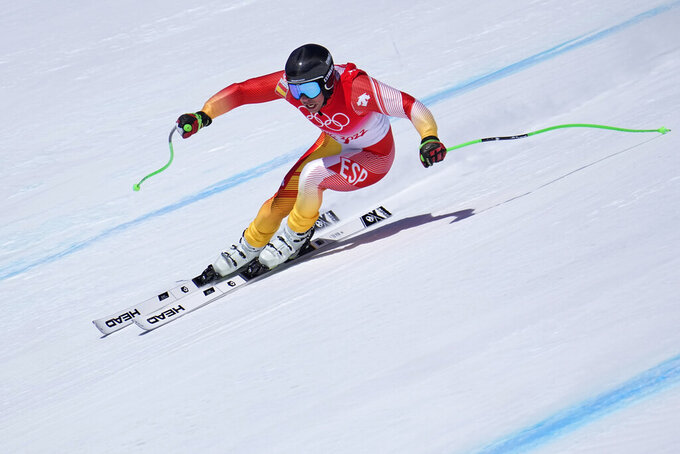 Adur Etxezarreta, of Spain makes a turn during a men's downhill training run at the 2022 Winter Olympics, Thursday, Feb. 3, 2022, in the Yanqing district of Beijing. (AP Photo/Robert F. Bukaty)

BEIJING (AP) — On a previously unknown Olympic downhill course, getting a relatively unknown champion is a distinct possibility.

Spanish skier Adur Etxezarreta could be the one, 50 years after his country won its only gold medal at the Winter Olympics.

Etxezarreta has never finished higher than 47th in a World Cup race but he has so far excelled on The Rock course, a slope that none of the top racers had ever been on before Thursday's first training session.

The 26-year-old Spaniard was second-fastest on that day, and seventh-fastest on a wind-affected second run the following day — although, like many others, he missed gates both time.

Saturday’s third and final practice session was halted after three racers because of high winds.

“For sure after this training, I made two solid runs and I think I can ski in a good level,” Etxezarreta said on the eve of Sunday’s downhill race, which will open the Alpine skiing program at the Beijing Games.

“Surprise or not I don’t know, it doesn’t depend only on me. The only thing I can make is to ski the way I’m skiing now … for sure sometimes there are big surprises in Olympics.”

American racer Tommy Moe won the downhill at the 1994 Lillehammer Games despite never having won the speed race on the World Cup circuit, and French racer Jean-Luc Cretier did the same four years later in Nagano.

Etxezarreta’s career highlight was a second-place finish in a lower-level Europa Cup downhill in Tarvisio, Italy, last month. That was the best ever Europa Cup finish for a Spanish man.

Francisco Fernández Ochoa is Spain's only Winter Olympic champion. He won the gold medal in the slalom at the 1972 Sapporo Games.

“For sure it’s inspiring,” Etxezarreta said when asked about Ochoa. “I don’t know. Tomorrow, I will try and make the best I can and we will see what happens.”

Etxezarreta grew up in the Basque region of Spain and lives between San Sebastian and Pamplona. He started skiing with his family in the Pyrenees but now trains mainly in Italy.

He has an Italian coach — Adam Peraudo — and also trains with the Italian team.

“For us, it’s a big support to train with other big teams because I’m only one speed skier. So for us, it’s a good help,” Etxezarreta said.

Having seen Etxezarreta up close, it’s no surprise to Italian skier Christof Innerhofer that he’s doing so well in Beijing.

“(He) trains with us every now and then and several times he’s had the best time, ahead of all of us,” Innherhofer said. “Last year in Cervinia, when we were training there before the races, he beat me, too, by a significant gap. He’s been skiing strongly in training for two, three years already.”

Test events on the Olympic course were canceled over the last two years amid the pandemic. So with so little knowledge of the course, and the potential for more wind, there are more variables and more uncertainties — something that could lead to an unexpected face on the podium.

“It’s not like he has a really great chance, but he has a chance," Innerhofer said. “It’s nice. But there’s a few here … (Max) Franz … (Bostjan) Kline, Miha (Hrobat). They are outsiders but here I’m expecting some surprises.”