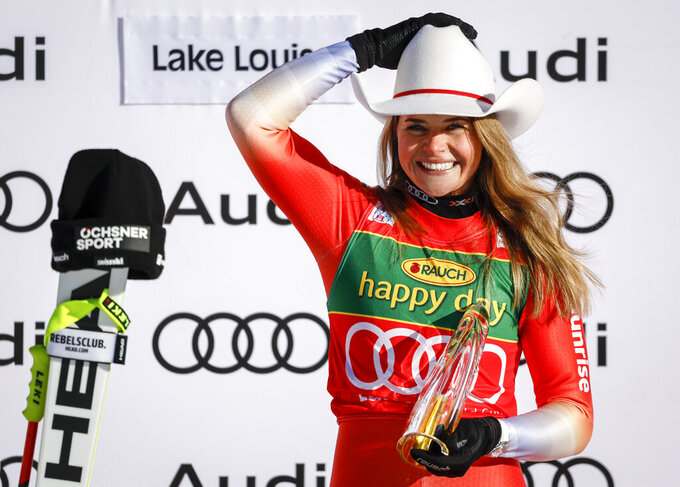 Suter, a 28-year-old from Switzerland who won the gold medal in the downhill at the Beijing Olympics in February, covered the course in 1 minute, 20.75 seconds. She edged Cornelia Huetter of Austria by just 0.02 seconds. Huetter was third in Friday's downhill.

Suter had earned five previous podium finishes at Lake Louise — including second place on Friday and third on Saturday — but never had managed to climb to the top step at the Canadian speed venue until now.

Norway’s Ragnhild Mowinckel was third in 1:20.91 on a day when the temperature was about 10 degrees Fahrenheit (minus-12 Celsius).

Mirjam Puchner was next Sunday, followed by Goggia, the 30-year-old from Italy who won gold in the downhill at the 2018 Pyeongchang Olympics and silver at this year’s Games. Goggia won a pair of downhills at Lake Louise on Friday and Saturday, a year after going 3 for 3 at the venue with triumphs in two downhills plus a super-G.

Breezy Johnson was the top U.S. finisher Sunday in 23rd place, one spot ahead of teammate Bella Wright.