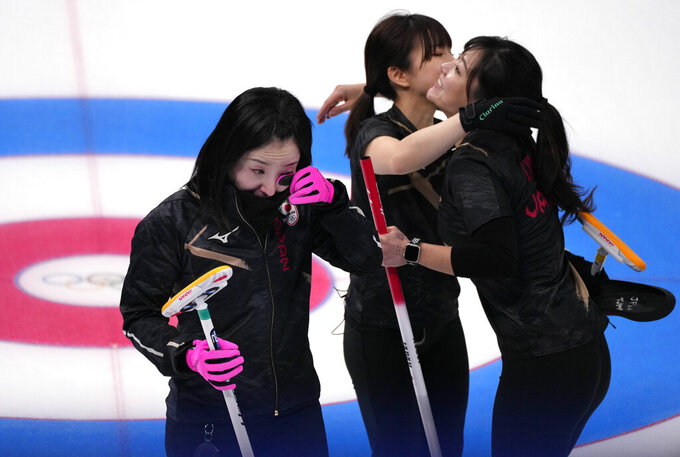 Japan's team, comfort each other, after being defeated in the women's curling match against Switzerland, at the 2022 Winter Olympics, Thursday, Feb. 17, 2022, in Beijing. (AP Photo/Nariman El-Mofty)

BEIJING (AP) — The Japanese women's curlers were waiting in the mixed zone, thinking their Olympics were over, when their coach told them they had made the semifinal.

They collapsed to the ground in tears.

“Our coach told us, ‘You are going to the semifinal.’ But we said, ‘No,’” vice skip Chinami Yoshida said Thursday after the 8-4 loss to Switzerland in the round-robin finale. “But the coach said, ‘100% true.’ We were just crying out. We have a lot of emotions. Very, very emotional for everybody.”

Advancing by virtue of the second tiebreaker — a pregame test called the draw shot challenge — Japan will get a rematch against Switzerland in Friday’s semifinal. Sweden will play Britain for the other spot in the gold medal match.

The British beat the Russians 9-4, then waited for the result of the last match on the ice, between Sweden and South Korea’s Garlic Girls, who won the silver medal four years ago at the Pyeongchang Games.

Sweden led 6-4 heading into the final end. A victory by South Korea would have landed it and Canada in the playoffs. Sweden’s win meant Britain and Japan advanced instead.

“Once we won that game, a lot of it was standing and waiting until the final score of the Sweden game,” British vice skip Vicky Wright said. “It was nerve-wracking.”

The final session left Japan, Britain and Canada tied at 5-4 and only two spots available. Because they all went 1-1 in head-to-head, the tiebreaker — used for the first time in the Olympics — was their average distance in the draw shot challenge, a pregame, two-throw draw to the button on an empty sheet.

The three tied teams were the worst in the competition, but all that mattered was who was last. And with that, Canada was out of the women’s field.

“We knew the format going in, and how important that shot at the button was,” Canadian second Jocelyn Peterman said. ”We obviously didn’t have a great week at that.”

The challenge was instituted in international curling since the last Olympics, replacing tiebreaking matches, to shorten tournaments.

“It’s similar to a shootout in hockey. It’s kind of a different skill set, and just focusing on one skill as opposed to the game as a whole and the team component of it,” Peterman said. “So yeah, I think that would be an ideal scenario, but we knew going in.”