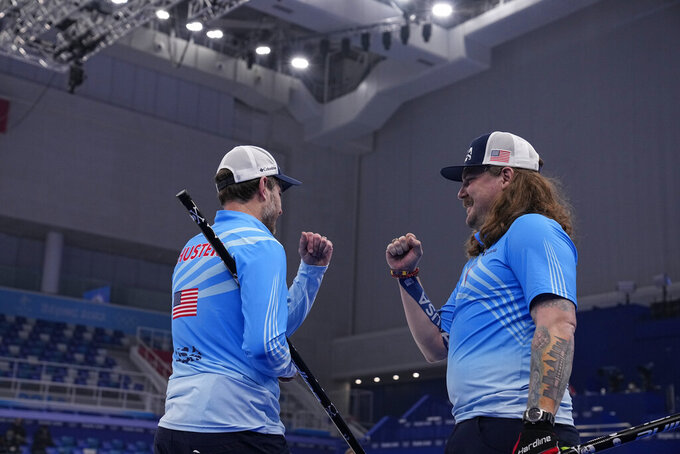 BEIJING (AP) — John Shuster told himself not to look.

Three sheets away from the Americans' final match of the Olympic curling round-robin, Norway was playing Italy. A Norwegian loss would put the reigning gold medalists in the playoffs — regardless of what they did against Denmark.

“I tried to peek over there as little as possible,” Shuster said Thursday after beating the Danes 7-5 to advance to the semifinals and keep his hopes of a repeat gold medal in play.

“We knew that didn't matter,” he said. “If we go out there and we lose and someone else has to win, we’re probably not going to have good momentum going into the finals anyway."

This time there was a twist, though: A U.S. loss coupled with a Norway loss would still put the Americans in the playoff.

“I was never at this Olympics in a place where I was last Olympics,” he said. “I’m just a different person. I’m a changed person from that experience.”

U.S. second Matt Hamilton said reaching the playoffs was just the first goal. But the team is still motivated to come home with a medal — especially newcomer Chris Plys, who replaced Tyler George in the foursome since it won it all in Pyeongchang.

“We still have a guy on this team who doesn’t have a medal, so we really want to get on that podium,” Hamilton said. “Anywhere would be good. Top would be best. But you know, just leaving here with some hardware would be a dream come true.”

Swedish skip Niklas Edin, who has a silver from Pyeongchang and a bronze from Sochi, would like to take another step up the podium. It could mean a gold medal rematch with the Americans.

“Obviously, being the Olympics that makes it a little bigger,” he said. “Looking back four years doesn't really do us any good. We're just looking at what we're here to do right now."

With the U.S. playing Denmark on Sheet A and Norway vs. Italy on Sheet D, the matches began at 9:05 a.m. and seesawed for about hour in which the Americans were relatively safe; even though they fell behind early, so did Norway.

Both matches were 2-2 heading into the fourth end, when things turned in the Americans’ favor.

Denmark’s last stone slid slowly past its intended target — a U.S. rock that was well protected by two other American ones in the scoring area. That was a steal of three, giving Shuster a 5-2 lead after four ends. Three sheets away, Italy scored two to take a 4-2 lead.

The Americans needed to win, and they did.

They gave up two points in the ninth end to make it 7-5, but Shuster would hold the last-rock advantage in the 10th. The Americans methodically eliminated any Danish rocks that could lead to a multipoint steal; when Shuster knocked away the second-to-last red rock, Denmark conceded.

“We never tend to do it the easy way," Hamilton said. “We like to put our backs up against the wall and try and claw our way out of it.”