9 years on, Cameroon Olympic boxer talks of defection to UK 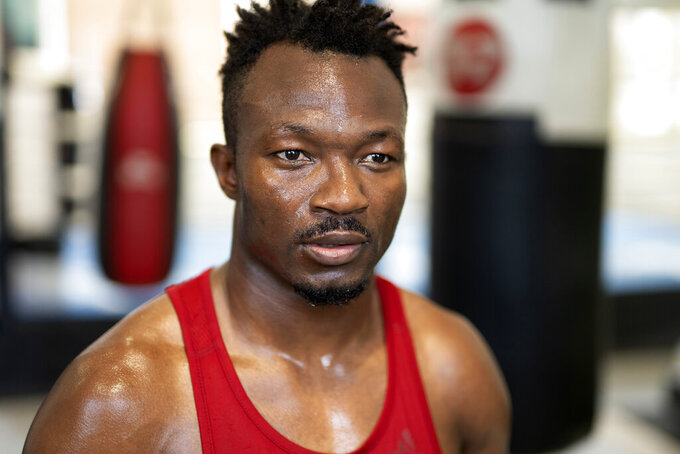 Boxer Thomas Essomba poses for a portrait after training at Steel City Gym in Sheffield, England, Thursday, Aug. 4, 2021. Cameroonian boxer Thomas Essomba, was one of seven people who defected at London 2012. Nine years on, he talks to AP about what it’s been like to live with that decision. (AP Photo/Jon Super) 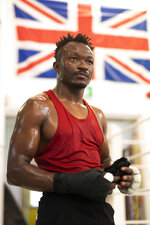 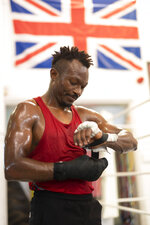 SHEFFIELD, England (AP) — When boxer Thomas Essomba walked out of the London Olympic Village with his suitcases in 2012, he left behind his life in Cameroon to start another one from scratch in a country he knew next to nothing about.

Essomba, who was captain of his country’s boxing team, disappeared with four other boxers during the Olympic Games. Of the 37 athletes Cameroon sent to London, seven — including a swimmer and a female soccer player — never went home after completing their events. In the nine years that followed, Essomba said he sometimes struggled to reconcile his yearning for his family in Cameroon and his dream of becoming a successful boxer in the U.K.

“It was a very, very difficult decision, I wasn’t happy to be honest,” the 33-year-old told The Associated Press in an interview Wednesday at a gym in Sheffield in central England. But he added: “The U.K. is my country now. I’m happy to be here. By the grace of God I think everything will be all right.”

The stories of young athletes who defect during the Olympics often capture the world’s imagination. This week, Belarusian sprinter Krystsina Tsimanouskaya left the Tokyo Games and sought refuge in Poland, saying Belarus team officials tried to force her to fly home early after she criticized them.

The 24-year-old runner said her move was not premeditated, and it’s not clear what’s next for her.

Hundreds of athletes have sought asylum at global sporting events, especially during the Cold War, to flee authoritarian rule at home or to seek a better life in the West. As many as 117 athletes defected at the Munich Olympics in 1972, according to reports at the time, and Cuban athlete defections to the U.S. have been common. At the London Olympics in 2012, several other athletes from other African teams also disappeared and reportedly sought asylum.

Essomba maintained he “had a good life” back home and did not plan to escape before arriving in London. The reasons behind his decision weren’t entirely clear: The boxer said he ran into trouble with the Cameroonian government’s sports officials, but did not elaborate. Some on his team reportedly said at the time that they were poorly treated.

“The only thing I’m scared of was going back and stop doing boxing, because boxing is all my life,” he said of his thinking at the time. “They don’t like challenge. I’ve tried to challenge them and my life became dangerous.”

Cameroon, a predominantly French-speaking nation of 26 million in Central Africa, has a high poverty rate and stark inequality between rural and urban areas. President Paul Biya has been in power since 1982, and critics accuse him of political oppression and persecuting his adversaries.

“It has for years been a corrupt, murderous and authoritarian regime, and there were often issues about athletes not being paid, then complaining and then perceiving themselves to be in danger if they went back to Cameroon,” said Jackie Fearnley, a researcher and campaigner who has helped Cameroonians seeking asylum in Britain.

Rights abuses in the country are rife and some seek refuge abroad because they are seen as dissidents, said Fearnley, who has also helped many LGBT people who face routine arrest and imprisonment in Cameroon.

Essomba said it was a “very sad, very bad moment” when he left the Olympic Village with his four teammates. His mother, relatives and children back home depended on him, and he spoke next to no English.

“Everything changed when I came here,” he said. “But I said, ‘Listen, my life first.' I had to protect my life.”

Once out of the Village the men took a bus to south London, found a place to live and stayed there for weeks while a lawyer helped them with the paperwork to apply for asylum with the British government. At the time, they all had six-month visas allowing them to stay in the U.K.

“I didn’t know anything about the U.K. Even applying for asylum, I didn’t know that I was supposed to do it,” Essomba said. His application was granted within a year, and he became a British citizen soon after.

Essomba said he has had moments of regret when things were not going so well, and he misses his family and homeland terribly. But he’s adapted to life in England. He found a girlfriend and new friends. He stays in touch daily with his family on social media, and has returned secretly to his homeland after obtaining his British citizenship.

Professionally, he held the Commonwealth flyweight champion title from 2015 to 2017. He said he’s fighting to “write my name” by representing the U.K. in international competitions before he retires and goes into coaching.

“I haven’t reached my goal yet. My goal is to have a British title. This is my hope," the boxer added. "So that’s why I keep fighting. I believe I will do it.”