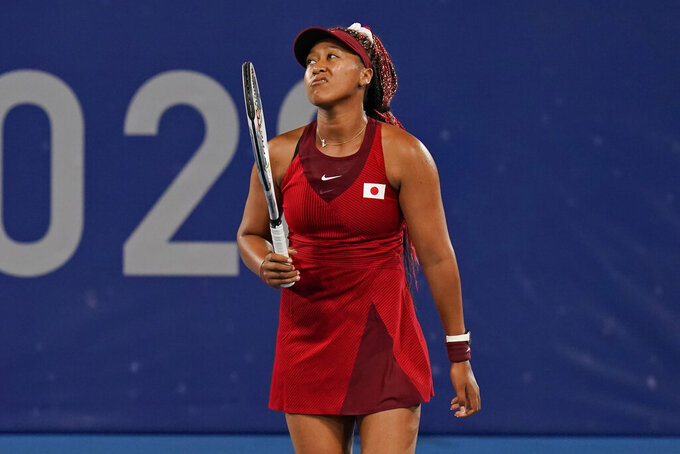 Naomi Osaka, of Japan, reacts after losing a point to Marketa Vondrousova, of the Czech Republic, during the third round of the tennis competition at the 2020 Summer Olympics, Tuesday, July 27, 2021, in Tokyo, Japan. (AP Photo/Seth Wenig)

TOKYO (AP) — One player was carted off in a wheelchair. Another said he could “die” and nearly passed out.

Extreme heat and humidity were major issues during the tennis competition at the Tokyo Olympics, and the sport’s governing body said Sunday that it needs more competition days at future Games to provide better rest and care for its players.

The goal is an extended competition schedule with two more days for the next Olympics in Paris in three years, when tennis will be contested on the hallowed red-clay courts of Roland Garros — home of the French Open.

“What we really need is 11 days and more rest for the players,” International Tennis Federation president David Haggerty said. “We have to talk to the stakeholders and to the tours.”

Spanish player Paula Badosa had to retire from her quarterfinal match against Marketa Vondrousova because of heatstroke. She left the court in a wheelchair.

After complaints from top-ranked Novak Djokovic and second-seeded Daniil Medvedev, who came close to passing out and had trouble breathing, the ITF eventually shifted the start of play from 11 a.m. to 3 p.m. to avoid the hottest part of the day — which is the morning in Tokyo this time of year, when the sun rises before 5 a.m.

But the schedule shift wasn't made until the sixth day of the nine-day competition.

In a change from five years ago, the men’s singles final at the Tokyo Games was best of three sets.

“The one area that we weren’t able to deal with was schedule,” said Kris Dent, the ITF’s senior executive director of professional tennis. “We have nine days. We needed to start at 11 at the start of the competition in order to make sure that we got through those initial 96 matches. We had a forecast of a typhoon coming through as well.

“The key element really is about player rest and, unfortunately, playing five events across nine days doesn’t allow us the luxury of giving the players enough rest. That’s going to be a high priority for us moving forward into Paris and Los Angeles,” Dent added, referring to the hosts of the next two Summer Games.

Djokovic had to withdraw from the bronze-medal match in mixed doubles with Serbian partner Nina Stojanovic after getting worn down in two draining singles defeats.

“Certainly the players have been telling us that it’s important to them to be able to play in two or three events ... and what the Olympics mean to them,” Haggerty said. “We had conversations leading into the Olympics and we’ll do the same as we move forward.”

Haggerty also addressed the growing discussion about athletes’ mental health at the Games.

Second-ranked Naomi Osaka recently took a two-month break from the sport to address her mental health after withdrawing from the French Open.

“I had reached out to Naomi’s team, actually before Roland Garros, to have conversations and we continued those here with her team when they were here as well,” Haggerty said. “Player health and mental health is so important to us. We’re there for the players and the tours are as well.”

The ITF will lead a mental health summit with the International Olympic Committee and other stakeholders in October, Haggerty said.

Osaka announced going into the French Open in late May that she wouldn’t speak to reporters at the Grand Slam tournament, saying those interactions create doubts for her. Then, after her first-round victory in Paris, she skipped the mandatory news conference.

Osaka was fined $15,000 and — surprisingly — publicly reprimanded by those in charge of Grand Slam tournaments, who said she could be suspended if she kept avoiding the media.

The next day, Osaka withdrew from the French Open entirely to take a mental health break, revealing she has dealt with depression.

She sat out Wimbledon, too, but returned at the Olympics and spoke with the media after each of her three matches, having lost to Marketa Vondrousova in the third round.

The next major tournament for Osaka should be the U.S. Open.

“I don’t know what the plans are for the USTA or any of Naomi’s plans as well," Haggerty said, "so they would be better informed.”