Alex Morgan back with US national team, daughter in tow 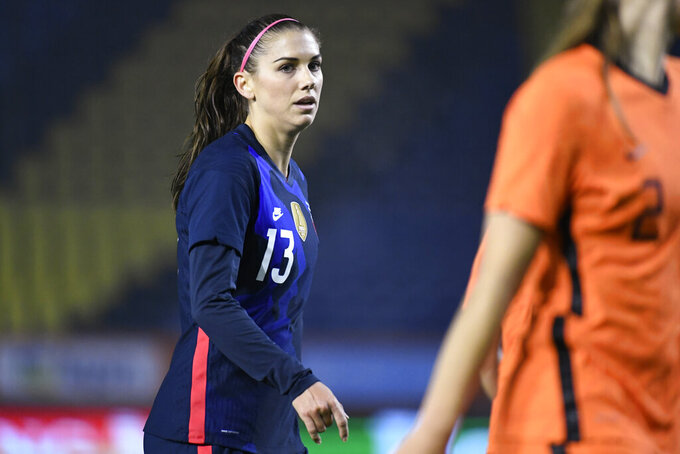 FILE - In this Nov. 27, 2020, file photo, United States Alex Morgan reacts during the international friendly women's soccer match agaiinst The Netherlands at Rat Verlegh stadium in Breda, southern Netherlands. Morgan is back with the U.S. national team and learning to adjust to a career as a working mom. (Piroschka van de Wouw/Pool via AP, File)

Alex Morgan is still adjusting to her career as a working mom — and that means those post-practice naps are making way for daughter Charlie's schedule.

Morgan has returned to the U.S. national team in time for the upcoming SheBelieves Cup as well as this summer's Tokyo Olympics.

With Charlie in tow, of course.

“My life has definitely made a 180. When we have an afternoon gap between trainings or whatever it is, it’s not like, ‘Oh, let me lay down and watch TV and take like a nap,’" she said. "I’m hanging out with Charlie the whole time. I’m on her schedule and I absolutely love it, but it’s just very different, for sure.”

Morgan didn’t play for the United States last year because of her pregnancy and Charlie’s birth. Then after a stint playing in England, she battled the coronavirus and missed January training camp.

Following Charlie's arrival last May, Morgan wanted to get training and playing time to get back into game shape.

Opportunities were limited stateside. Her National Women's Soccer League team, the Orlando Pride, did not play in the league's Challenge Cup tournament last summer and the subsequent fall series was limited to just four games.

So she opted to go overseas to play for Tottenham, bringing Charlie with her.

“It’s just so fun to have Charlie around and for her to get used to having a lot of people around, and different people helping or playing with her. And for her to be just around all these incredible women that are so strong, such a such an intense environment,” Morgan said. “She just kind of brightens up the room. I think it lightens everyone up.”

Morgan appeared in five games and scored two goals for Tottenham before returning to the United States. Once home, she, her daughter and her husband, Servando Carrasco, all came down with COVID-19. The diagnosis kept her out of a pair of matches last month against Colombia.

She said she got quite ill.

“We were together for 10, 12, 14 days, kind of just recovering, sleeping as much as we could. I was fighting off a little bit of fever for quite a few days," she said. "But as I got back and took the right steps to get my body back into shape, I started to feel really good after about like three weeks or so. But it did take a little bit, and it took a lot of patience as well on my end.”

Morgan first grabbed attention during the 2011 World Cup as the youngest player to make the U.S. squad. She scored in the final, which Japan won on penalty kicks. She was also on the team that won the 2015 World Cup in Canada.

At the 2019 World Cup in France, she scored five goals in the opener against Thailand, then celebrated the winning goal against England in the semifinals with a cheeky tea-sipping pantomime. The United States went on to win the title with a 2-0 victory over the Netherlands.

Overall, the 31-year-old forward has 107 career goals in 170 matches for the United States.

Because of the pandemic, and the fact that the Olympics were delayed for a year, Morgan said she and her teammates are rested and prepared to gear up for Tokyo, if the Games happen.

First up is the SheBelieves Cup starting next Thursday. Canada, Brazil and Argentina are also participating in the round-robin tournament in Orlando, Florida.

“I think that if there is a silver lining in this, it is that all of our bodies could have probably used the break that we would never have gotten until we retired, if not for this pandemic. So for me, I feel like it did spark just that passion for the game and me feeling really excited every day going to training,” she said. “And now also having Charlie, I feel like I’m making the most of it when I go to training and I don’t want to give 90%, I want to make sure I give 100% every time I go to training because that’s pulling me away from Charlie. So I do definitely feel reenergized.”