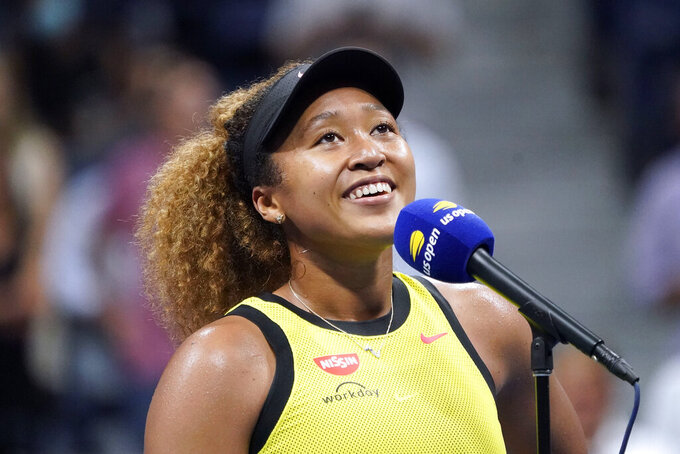 FILE - Naomi Osaka, of Japan, speaks to the crowd after beating Marie Bouzkova, of the Czech Republic, during the first round of the U.S. Open tennis championships in New York, in this Monday, Aug. 30, 2021, file photo. Osaka earned the Wilma Rudolph Courage Award for bringing awareness to social justice and mental health issues at the Annual Salute to Women in Sports on Wednesday night, Oct. 13, 2021, in New York. (AP Photo/Elise Amendola, File)

NEW YORK (AP) — Olympians Allyson Felix and Jordan Larson were honored as Sportswomen of the Year by the Women’s Sports Foundation.

Felix won two medals at the Tokyo Games — giving her 11 in her career — to surpass Carl Lewis as the most decorated American in Olympic track and field history. Larson led the U.S. women’s volleyball team to victory against Brazil for its first Olympic gold medal.

Naomi Osaka earned the Wilma Rudolph Courage Award for bringing awareness to social justice and mental health issues at the Annual Salute to Women in Sports on Wednesday night.

“I got the courage just to speak out growing up and seeing all of the people around me doing amazing things,” Osaka said, “and not having any fear and standing up for what they believe in.”

Kim Ng of the Miami Marlins, the first female general manager in baseball, received the Billie Jean King Leadership Award. Larry Scott, the former commissioner of the Pac 12 and former CEO of the WTA Tour, accepted the Champion for Equality Award.