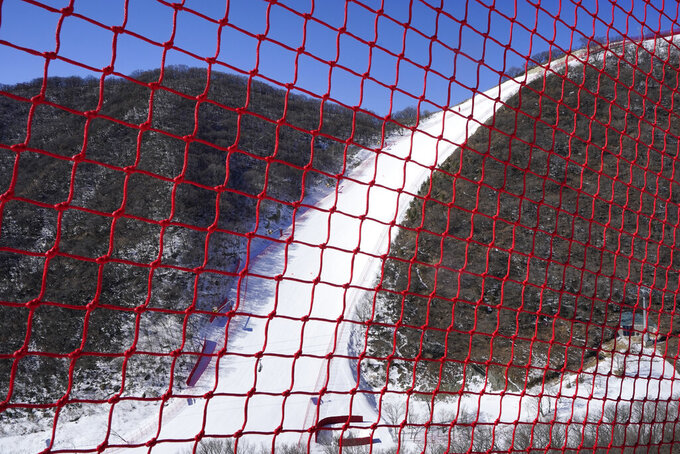 The alpine skiing downhill course can be seen through safety fencing at the 2022 Winter Olympics, Wednesday, Feb. 2, 2022, in the Yanqing district of Beijing. (AP Photo/Robert F. Bukaty)

None of the Alpine ski racers who’ll be zooming down the mountain at the Beijing Olympics ever has tried the slope that’ll be used with medals at stake. Not yet, anyway.

They might have given it a look — either via footage that made the rounds last year or, in recent days, because the course can be seen from where Winter Games participants are training.

No one, though, is allowed to ski on the actual track that will be used for racing until Thursday, the first of three official training days planned ahead of the men’s downhill, which is scheduled to open the Alpine program on Sunday. This track is new to everyone because Beijing is not a regular stop on the World Cup circuit, the usual pre-Olympics test events were called off because of the coronavirus pandemic and teams agreed to not check it out unless everyone could.

So there are more unanswered questions — and “layers of complexity,” in former U.S. Olympian Ted Ligety’s words — for the athletes and their coaches than there usually are. About the pace, for example, or the topography. And that could lead to problems when the competition begins.

“Nobody really knows what we’re getting into there. But I think that that’s exciting,” said River Radamus, who is from Colorado and on his first Olympic team. “The more variables there are, the more people I know are going to take themselves out of the race. When there’s adversity or whatever, sort of accepting that and knowing that you’re going into the unknown is sort of empowering, because you know that there’s other people that aren’t going to be able to have that same mindset.”

In downhill, veteran skiers have an edge on many World Cup courses used year after year. They learn the intricacies — every little bump, jump and turn — and perfect the racing line over time, helping shave hundredths of seconds off their times.

In one respect, the uncertainty in Beijing could add to the danger quotient, something that already always is present in a sport with faster-than-an-American-highway speeds on slick slopes at intimidating angles.

Some view the situation as a great equalizer, because no one will derive any sort of advantage from past experience.

“It’s not scary. It’s good,” said Vincent Kriechmayr, an Austrian who won the downhill and super-G at last year’s world championships. “It’s the same for everybody.”

And then there also are those, such as 2018 Olympic downhill champion Sofia Goggia of Italy, who think the limited opportunities to ski the mountain and try to learn its ins and outs ahead of time could end up favoring the quickest learners in the group.

“Who is good at studying things, and studying details, remembering them, is going to be (at an) advantage,” Goggia said.

International Ski Federation race director Markus Waldner described the venue as “challenging” and “demanding,” especially with the strong wind expected in the area. He said the course has various types of terrain and includes steep and lengthy gliding sections, along with what he called “a nice finish jump.”

The only men’s world-class ski racer who’s seen it all for himself is retired: Didier Defago, who won the Vancouver Games downhill gold for Switzerland in 2010 and left the World Cup circuit in 2015. His input gives ski officials a sense of whether the hill is ready for racing.

Then, once training runs begin, it’s time to really gauge whether it is too hard or too easy and what, if any, adjustments should be made, such as shaving a jump’s takeoff to make it less precarious on a particularly windy day.

Until access is granted to the current Olympians, all anyone can rely on is videos distributed to teams last year.

One shows an amateur giving it a go (“He wasn’t a good skier. ... He misses a bunch of gates,” said Travis Ganong, who is returning to the Winter Games after finishing fifth in the 2014 downhill), while the other is a preview of the full course shot by a drone.

Not necessarily all that helpful.

“You don’t really know what it looks like,” said Bryce Bennett, a Californian who tuned up for his second Olympics by winning a World Cup downhill in December. “If you record GoPro footage, you’re like: ‘This is the best video I’ve ever shot! That was so cool!’ And then you go home and you look at it and you’re like, ‘That looks so bad.’”

Ligety figures his second Winter Games gold medal, in the 2014 giant slalom, was at least in part a product of familiarity with the course in Russia’s mountains.

That helped his skiing and his mental approach.

“I always give a big credit for my success in Sochi to having trained on that hill a bunch. ... I was that extra 5-10% less anxious about the whole situation, just to ski more free,” said Ligety, who retired last year. “Having a brand new fresh hill at the Olympics definitely adds another level of nervousness and anxiety for the racer.”