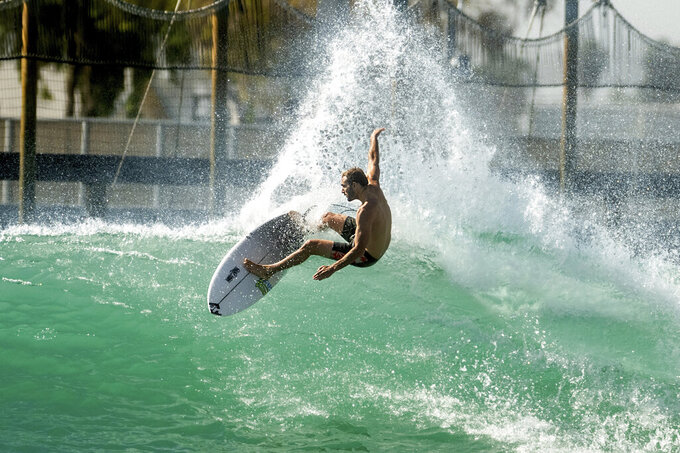 FILE - In this Tuesday, June 15, 2021 file photo, Portuguese surfer Frederico Morais practices for a World Surf League competition at Surf Ranch, in Lemoore, Calif. Portugal's Olympic team says that surfer Frederico Morais will miss the Games after having tested positive for the coronavirus despite being vaccinated. The team says that Morais won’t travel to Tokyo on Friday, July 23, 2021 as planned. The 29-year-old Morais qualified for the Games after finishing as the top-ranked European surfer at the 2019 World Surfing Games held in Japan. (AP Photo/Noah Berger, File)

ICHINOMIYA, Japan (AP) — An aggrieved Olympic surfing alternate forced into a futile race against time to catch a wave in Japan is slamming a competitor's officials as “selfish” for not being transparent about his rival's positive COVID-19 test that cost him a shot at the sport's historic Summer Games debut.

Angelo Bonomelli, 30, is the frustrated Italian surfer who, by a hair, missed out on the sport’s Olympic debut because Portugal's Frederico Morais, 29, waited until the last minute to disclose his reported infection — despite the long list of coronavirus rules, restrictions and realities set for the Tokyo Olympics.

That meant it became impossible for Bonomelli or the next eligible alternate, Carlos Munoz of Costa Rica, to make it to Tokyo on time, which ultimately left a startling hole in the surf zone Sunday, the first day of the men’s inaugural Olympic surfing competition.

Bonomelli in an interview with The Associated Press said Portugal’s National Olympic Committee should've fessed up sooner about the reported infection of a virus that has already killed more than 4 million people in one of the worst global health crises in modern history.

“I just think (it’s) not fair for me to blow a lifetime opportunity,” Bonomelli said in a message. “There is some negligence.”

Morais was unapologetic in an email to the AP addressing the issue. He said he thought there was a chance he’d get a clean COVID-19 test after he tested positive weeks ago. He completed a 10-day isolation, didn’t have symptoms and was fully vaccinated for over a month.

“I worked two years to earn my spot,” Morais said. “On my side the transparency was total, I was trying everything to the last minute, I was running against the time and once I understood there was no more chance for me to go I pulled out. More than transparency it was my dream that got ruined because I did earn my spot fair and square.”

The Japanese government requires proof of a negative COVID-19 test within 72 hours of arrival to the country. Bonomelli said Morais should have been required to report immediately because it can take weeks for the coronavirus to clear after an infection.

The Athlete and Officials Playbook is a 70-page document published by the IOC and Tokyo organizers detailing all the health rules and protocol each of more than 11,000 competitors must follow.

It requires those athletes testing positive for COVID-19 before traveling to Japan to “inform your (COVID-19 Liaison Officer) immediately.”

“Contact your (officer), who will record your symptoms, test results and close contacts, as well as inform Tokyo 2020 and agree on next steps,” the athlete rules demand.

Morais did not address the AP’s questions regarding when he informed Portugese officials and the International Surfing Association, the sport’s Olympic governing body, is quick to distance itself from the national Olympic committee’s decisions , which ultimately bears responsibility for its athletes.

ISA Officials immediately offered it to Italy, which declined citing the impossible travel logistics, and then Costa Rica, which accepted in the afternoon. The ISA also quickly notified the six other NOCs of the possibility they could have a chance to place an alternate in the Games. The NOCs were asked who, if anyone, could possibly pull it off given the stringent COVID-19 precautions in place.

In non-coronavirus times, alternates would generally be expected to travel with the full team in case of illness or injury, but extensive COVID-19 precautions and the risk of exposure itself this year has kept many at home.

Other top alternates, including celebrity surfer Kelly Slater, as well as Lakey Peterson for the women’s game, also opted not to bother with Japan, though USA Surfing said both were prepared to travel just in case.

Bonomelli said he wishes the Italian team would have prepared to take him as a backup, which could have saved the situation.

“It’s mind blowing how unfair it is,” Bonomelli said.

Surfers qualify individually via world tournament rankings, though each country can only have two surfers per gender.

Bonomelli was the first eligible alternate for the 20 coveted spots in the men’s game after Morais announced late Friday that he tested positive for COVID-19 and would miss the event. The ISA said it was unaware and also first learned of the reported infection from Morais' personal Instagram announcement.

That prompted the ISA’s scramble to confirm a last-minute replacement, though officials were clear they wouldn’t adjust the competition schedule to accommodate Munoz’s travel. Costa Rica, the ISA said, accepted that reality but held out hope that the competition may be weather delayed — a gamble on a quirk that is distinct to surfing.

“It is truly unfortunate Carlos was unable to arrive in Tokyo in time for his first heats, but his NOC took the decision to accept the reallocated slot and send him to Tokyo fully aware of the risk to the participation their athlete,” said Robert Fasulo, ISA’s executive director.

The coronavirus issue was all but inevitable and one that Olympic organizers had long planned for. As of Monday, the tally of COVID-19 cases in Japan among people accredited for the Tokyo Olympics was 153 since July 1, games organizers said. The total includes 19 athletes who tested positive in Japan.

Among them is American beach volleyball player Taylor Crabb, who was left in limbo upon arrival when he tested positive for the coronavirus. Just hours before the deadline to submit the names for the U.S. Olympic roster, Crabb’s fourth test came back positive and Tri Bourne replaced him.

Tri Bourne was driving back to Los Angeles from a family vacation in Las Vegas when he got a call from Crabb’s partner, Jake Gibb, asking him to sub in. Bourne flew to Japan, even as Crabb continued to take tests in hopes that it would come back negative, but that allowed Bourne to be in place even at the last second.

“This has been crazy for me, just like mentally trying to comprehend the excitement of becoming an Olympian but also feeling for Taylor and understanding this is his spot ... and I’m just honored the way they are accepting me onto the team and allowing me to come in,” Bourne said in a social media post. “I didn’t really ever stop pursuing being an Olympian. I stayed in shape and I just feel like I couldn’t be any more ready for this moment.”

Bonomelli and Munoz weren’t so lucky.

Munoz said he overcame a major Caribbean storm with the help of several locals who rushed to help him get to the airport in Costa Rica, only to learn as he was boarding his connecting flight from Los Angeles to Japan that the ISA would be hosting the first elimination round on the first day. Munoz got off his flight, disappointed the federation did not honor “Olympic values” in the situation.

“The Olympics that promote values, and the ISA for a better surfing future, didn't care at all!” Munoz said. ”That was heart(breaking) as a human and athlete."

Bonomelli said that the Italian team chose not to accept his alternate surfing invitation because he could not immediately get an “official Olympic” COVID-19 test, which he said he had to take in Rome before heading to Japan.

Like many surfers, Bonomelli is a globe-trotting wave chaser who is currently living in Costa Rica, where, he discovered, there is not a sanctioned hospital that complies with the Italian Olympic Committee’s rules.

Bonomelli added that the ISA could have also delayed the competition given that the three-day contest is over an eight-day competition window, but the governing body chose to begin on the first open day.

The ISA said Costa Rica did officially request a postponement as day one of the competition was already underway. It wasn’t received until after Munoz’s heat.

The final outcome was a surreal sight fitting for pandemic times: Munoz was on the scoreboard during the first and second rounds of the contest — a joyous, long-awaited opening day for surfing’s triumphant Olympic debut. But the surfer was nowhere to be found at Tsurigasaki beach, about 60 miles east of Tokyo, because he reportedly was still flying to Japan.