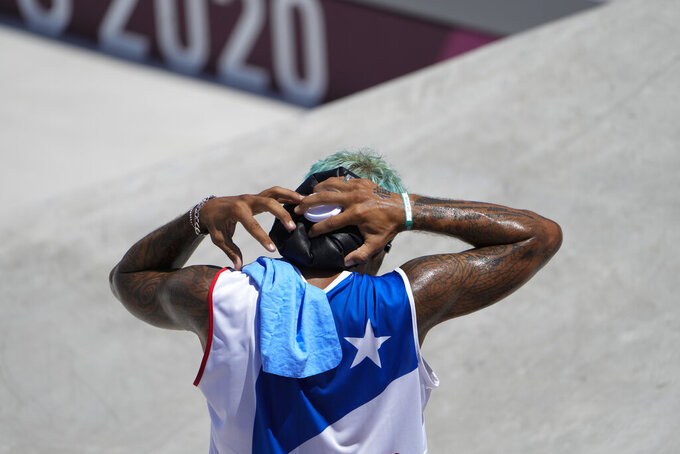 TOKYO (AP) — A typhoon headed toward Tokyo was supposed to bring a respite from the oppressive heat hanging over the Olympics.

Tropical Storm Nepartak did disrupt some of Tuesday's events but blew in and out of Tokyo hardly leaving a mark.

Olympic organizers preemptively altered the schedules for archery, rowing and sailing in anticipation of high winds and heavy rain. And while it did rain early in the day, it had cleared by afternoon for yet another hot and humid day of competition.

Athletes have struggled in the heat since the start of the Olympics: Svetlana Gomboeva collapsed from heatstroke on the first day of archery, tennis player Anastasia Pavlyuchenkova shoved bags of ice up her skirt and Novak Djokovic and Daniil Medvedev successfully leaned on the International Tennis Federation to give players extra time during breaks to offset the high temperatures.

July and August in Japan are notoriously hot and humid and Japan has faced criticism for not accurately describing the severity. During the bidding process organizers described the summer weather as mild and ideal.

But daytime highs regularly hit 95 degrees Fahrenheit (35 Celsius) but have exceeded 104 degrees (40 Celsius) in some places in recent years. The Environment Ministry began issuing heatstroke alerts in July 2020 for the Tokyo areas and in April for the entire nation.

Japan reported 112 deaths from June to September last year, as well as 64,869 people taken to hospitals by ambulance for heat-related issues. Tokyo logged the largest number of heatstroke sufferers at 5,836 during the three-month period.