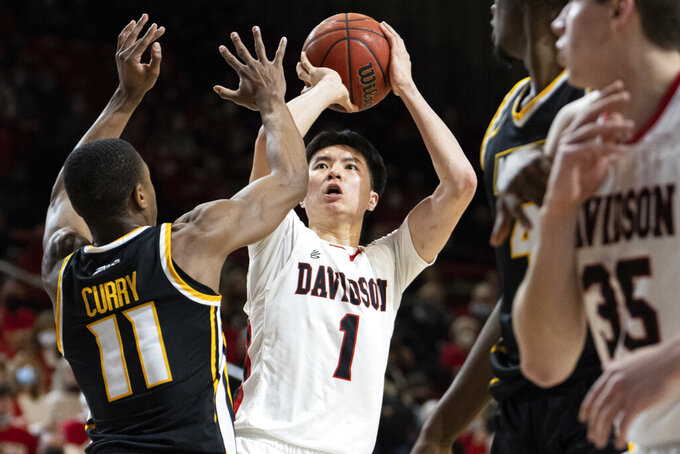 It wasn't until he turned 15 that Lee had his first opportunity to watch Stephen Curry, Klay Thompson and the then-world champion Golden State Warriors on TV for the first time when his perspective changed on how the game of basketball is played at the next level.

Lee is among the Asian players who are excelling at the NCAA level and have a realistic shot to play professional basketball in the United States.

Kayla Padilla is lighting up the scoreboard on the women's side. The 5-9 Penn sophomore leads the Ivy League in scoring at 19.7 points per game, shooting 37% from 3-point range.

The list of Asian players getting it done in the NCAA also includes UCLA's Johnny Juzang (Vietnamese) and Natalie Chou (Chinese).

It's another sign of the game’s impact around the globe, but players face big odds to overcome — only 0.4% of NBA players and 1.4% of the WNBA players in 2021 were players of Asian descent, according to reports compiled by The Institute for Diversity and Ethics in Sports.

His stock has been on the rise since last season when he accomplished something as a sophomore that even Curry never did at the school — shooting at least 50% from the field, 40% from 3-point range and 90% from the foul line. He was just the 11th Division I player to accomplish that feat since the 1992-93 campaign, and the NBA began to take notice.

There were seven league scouts at Davidson's recent home game against VCU, and Wildcats coach Bob McKillop — who helped Curry along the way to the NBA — said Lee continues to get better with each passing week, saying his IQ and immeasurable talents are off the charts.

“Every coach should have an opportunity to coach a player like Hyunjung Lee,” McKillop said. “He’s exceptional. He puts the team first and holds himself to a level of accountability for a mistake, or for improvement at a level that very few people do.”

Lee is succeeding despite the pressure of carrying the hopes and expectations of an entire nation on his back. He has become a wildly popular figure in South Korea, and Davidson assistant AD for athletic communications Joey Beeler has been inundated with dozens of interview requests for Lee from South Korean media over the past few weeks.

If Lee were to make it to the NBA, he would become only the first South Korean-born player since Ha Seung-Jin was selected in the second round of the 2004 draft by the Portland Trail Blazers.

“There is a lot of pressure, sure,” Lee said. “But I am just trying to enjoy this moment and improve myself as a basketball player and a person. Davidson is doing pretty well right now, and that is what is most important to me.”

Lee realized early in high school that if he planned to reach his expectations he would need to play against better players, which meant leaving South Korea. That's why he jumped at the opportunity to join the NBA Global Academy in 2018 in Australia.

Before his arrival there, Lee had modeled his game after Kevin Durant because he'd always been the tallest player on the court in South Korea and had strong ball skills. But he quickly realized he was going to have to find a different niche.

“I went to the academy and I realized, ‘Oh, I can’t be K.D. No way,'” Lee said with a laugh. “There were a lot of guys taller than me and a lot more skilled."

His father, who was a high school basketball coach for 35 years, advised him to focus on his 3-point shooting.

So Lee began to study Thompson's shot, patterning his game after the Warriors' sharpshooter.

Lee has played on the South Korean senior national team for the FIBA Asia Cup 2021 qualifiers and in the 2020 Olympic qualifying tournaments — following in the footsteps of his mother Jeong A Seong, a silver medalist in basketball for South Korea in the 1984 Summer Olympics.

Lee's journey has been challenging.

He had to work overtime to learn English his senior year of high school because he said “communication is key” in basketball, and added that he felt his physical abilities were behind some of his teammates when he arrived at Davidson in 2019.

“My freshman year, I was still struggling with the guys and playing the game,” said Lee, one of 10 finalists for the Julius Erving Award given to the top small forward in the nation. “This is probably a stereotype, but all of the guys are like white and Black, and I’m Asian. So I’m probably the least athletic. I was trying to find a way to get over that situation. But that is why I came to America. So I'm learning a lot.”

Like Lee, Padilla is beginning to garner attention at Penn and is hoping to inspire other Asians to play basketball.

She has time to work on her game and better improve her prospects of making the WNBA with two more full years of eligibility remaining. The guard who grew up Torrance, California, was the Ivy League Rookie of the Year in 2019-20. (She didn't play last year because all Ivy League sports were canceled due to the pandemic.)

“If I had a chance to be one of the first Asian-Americans and the first Filipino to play in the WNBA, that is something I definitely wouldn't turn down if the opportunity came about,” Padilla said.

Filipino Chanelle Molina had signed a contract last year with the WNBA's Indiana Fever, but was waived in training camp and hasn't played in a game.

While the WNBA remains a goal, Padilla is preparing herself for life beyond basketball in case things don't work out.

She has established an online platform called “The Sideline Post," where college athletes can share their stories through their own words, a concept similar to The Players' Tribune. She also has a merchandise line called “HCExKP" that she runs along with her longtime basketball trainer Jared Lloyd, as now allowed by the NCAA's new "name, image and likeness” deals.

Padilla said, “One of the main reasons I came to Penn was to have opportunities beyond just thinking about basketball."

She can check off that box on her to-do list while basketball fans keep an eye on her and other Asian players.