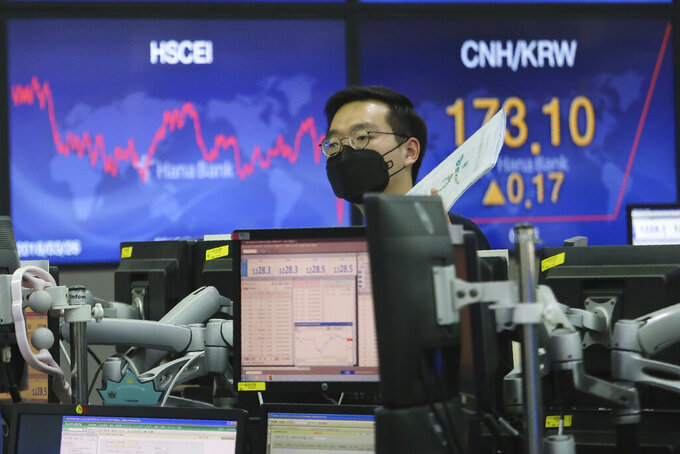 A currency trader wearing a face mask works at the foreign exchange dealing room of the KEB Hana Bank headquarters in Seoul, South Korea, Friday, April 3, 2020. Asian stocks were mixed Friday after Wall Street gained for the first time in three days on stronger oil prices despite enduring uncertainty about how long the global economic decline due to the coronavirus pandemic will last. (AP Photo/Ahn Young-joon)

Some markets followed Wall Street higher in early trading after President Donald Trump said on Twitter that he expected major oil producers Saudi Arabia and Russia to back away from their price-cutting war. But by midday, all major Asian markets had retreated. Southeast Asian benchmarks were mixed.

U.S. unemployment numbers were a “hard dose of economic reality” for markets, Jeffrey Halley of Oanda said in a report.

Government data showed 6.6 million initial U.S. jobless claims this week, double the previous week's record-breaking figure. That raised the number of Americans who have lost jobs in the coronavirus-driven downturn to almost 10 million.

New Zealand and Jakarta gained while Singapore and Bangkok retreated.

Markets usually welcome lower energy costs for companies and consumers. But the abrupt plunge to below $20 this week from $60 at the start of the year triggered fears heavily indebted producers might default, undermining credit markets.

Trump said on Twitter he expects production cuts are coming after talking with Saudi Crown Prince Mohammed bin Salman. The Kremlin denied President Vladimir Putin had talked with bin Salman but Saudi Arabia called for a meeting of major producers including Russia.

The S&P 500 rose 2.3% to 2,526.90. It dropped as much as 0.6% earlier Thursday after the U.S. government reported more than 6.6 million Americans applied for unemployment benefits last week.

Roughly one of every 16 working Americans has applied for unemployment benefits in the last two weeks. Economists expect that to rise. That has many investors bracing for what may be the worst recession of their lifetimes.

Traders expect more volatility until numbers of new coronavirus cases begin to decline, which forecasters say might be weeks away.

The number of confirmed cases worldwide has topped 1 million, led by the United States with more than 236,000, according to a tally by Johns Hopkins University.