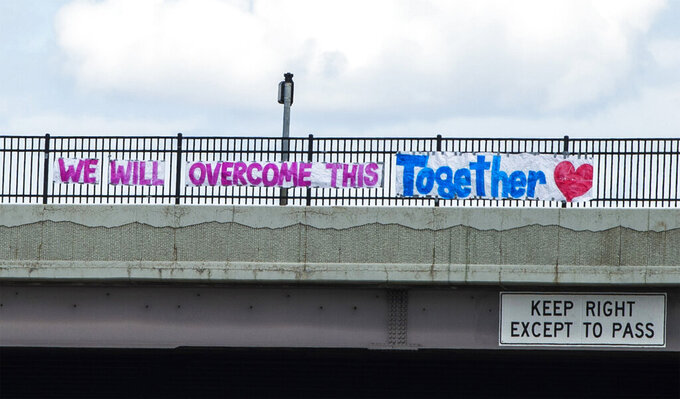 A sign on the 600 North overpass of northbound on I-15 says "We Will Overcome This Together" in Salt lake City, Tuesday March 31, 2020. (Rick Egan/The Salt Lake Tribune via AP)

SALT LAKE CITY (AP) — Jobless claims in Utah ballooned again as tens of thousands of people forced out of work during the coronavirus crisis flooded the system that had been staffed to handle a trickle during a time of historically low unemployment.

Numbers released Thursday show 28,560 new unemployment claims, a nearly 50% increase from the already record-setting levels of the week before as businesses close to slow the spread of the pandemic that has infected more than 1,000 people in Utah and hospitalized 100.

“It is absolutely a historic volume,” Kevin Burt, unemployment insurance division director for the Utah Department of Workforce Services, said about jobless claims. “We've never had it hit as fast as it did.”

There have been nearly as many claims in the past two weeks as all of 2019, he said.

The sudden onslaught is creating a strain for people like Duane Shepherd, 53, who tried to file for unemployment for the first time after getting laid off his from his trucking job with an oil-and-gas servicing company in Vernal following a steep drop in oil prices worldwide.

He said he gave up in frustration after the online system barred him from backing up to fix a minor error in his application. The online-chat function was unavailable, and when he called, an automated recording told him the department was not accepting phone calls because of the high volume of requests.

Shepherd considered going to the office in person, but a friend who worked there said he’d be routed back to the phones.

“The system is broken, it’s absolutely broken. I don’t know how people aren’t climbing the walls with frustration,” he said. He’s planning to try to file again and live on his small savings as he looks for work.

Shepherd, who has served as a Uintah County commissioner and local GOP party chair, is especially worried about others who don’t have experience with government.

While the numbers show that thousands of other people are getting through to file applications, the state is trying to fix problems by ramping up staffing as officials work through their own coronavirus challenges, Burt said. Shepherd’s experience shows why people are being asked to avoid calling about things such as the status of their benefits, to leave time for other questions.

Burt also reminded people that after their initial filing, they have to fill out brief weekly check-ins to keep receiving benefits.

For most people, the coronavirus causes mild or moderate symptoms, such as fever and cough that clear up in two to three weeks. For some, especially older adults and people with existing health problems, it can cause more severe problems.

— Technology companies in Utah are partnering with the state to increase coronavirus testing. Gov. Gary Herbert says people can go to testutah.com, report their symptoms and be directed to a test site if recommended, including two new ones in Provo and Orem. The group Silicon Slopes says the data won't be used for private purposes, but will help track and stop the spread of the virus.

— Salt Lake County jail has reported what's believed to be the state's first inmate case of COVID-19. The person with flu-like symptoms has been isolated, and others housed in the same unit were moved to quarantine cells. A deputy and a civilian employee have also tested positive. They have not been at work in the past five days.