BEIJING SNAPSHOT: N. Korea not at Games but diplomat remains 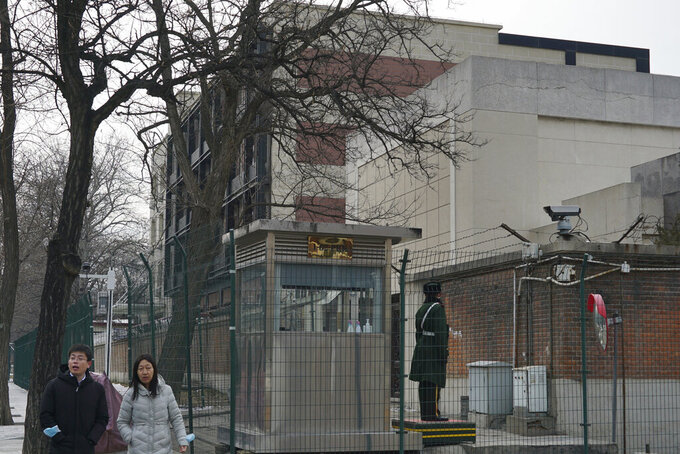 A police officer stands guard by the North Korean Embassy in Beijing, Thursday, Feb. 17, 2022. As Beijing holds the winter Olympic games, hundreds of North Koreans are enduring perhaps the longest-running pandemic-enforced separation in the world. The isolationist Communist state has sealed off its borders so tightly that they've left their own ambassador to China stranded in Beijing. (AP Photo/Dake Kang)

BEIJING (AP) — As skaters and sledders vie for medals at the Beijing Olympics, another extraordinary event is quietly unfolding on nine acres in the city’s embassy district. Here, in rows of concrete beige buildings, hundreds of North Koreans are enduring perhaps the longest-running pandemic-enforced separation in the world.

The Communist state has sealed off its borders so tightly that it has left its own ambassador to China stranded in Beijing.

Ji Jae-Ryong, 79, has been apart from his family for years even though his replacement arrived last February, two sources familiar with the matter say. Ji is ailing and regularly receives treatment in an elite Beijing hospital, one of them said. They declined to be identified because they aren’t permitted to speak publicly.

Four years ago, Pyongyang’s high-stakes diplomacy with Washington and Seoul jolted the 2018 Pyeongchang Winter Olympics in South Korea with geopolitical drama. Twenty-two North Korean athletes, hundreds of officials and cheerleaders, and even Supreme Leader Kim Jong Un’s sister came for the occasion, shaking hands for the cameras with their rivals to the south.

This time, not a single North Korean has flown in, even though China is Pyongyang’s biggest ally. The only things flying are North Korean missiles — though the ballistics tests are on hold during the Games, lest Pyongyang offend their Beijing benefactors.

That’s not to say there weren’t any North Koreans in the stands. Some from the embassy showed up, one source said, doing their COVID tests and filing in dutifully. Kim sent messages to make up for his absence, congratulating Chinese leader Xi Jinping on what he called a “great victory won by socialist China”.

When North Korea will open their borders is anyone’s guess. Citizens have been warned that leaflets dropped in from the South are potential vectors for the virus. One diplomat drew a comparison with World War Z, the zombie apocalypse movie, in which North Korea locked its borders and removed the teeth of everyone in the country to stem infections.

“Barely any information is coming out,” they said. “Who knows what’s going on now?”

But just last month, Pyongyang began allowing freight trains to cross into China again — a tacit reminder, perhaps, that even the world’s most isolated country, too, needs the help of others.