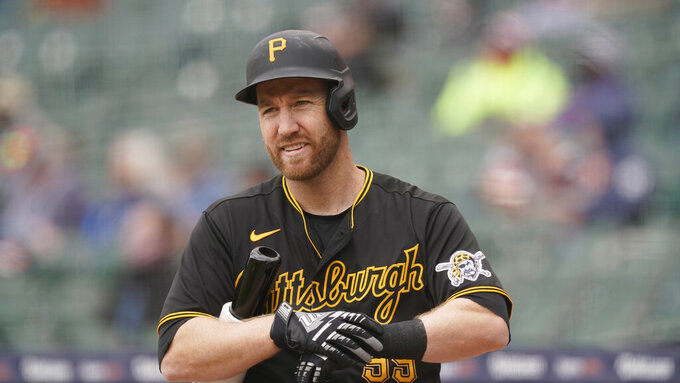 FILE - Pittsburgh Pirates' Todd Frazier plays during a baseball game against the Detroit Tigers in Detroit, in this Thursday, April 22, 2021, file photo. Frazier, a 35-year-old infielder released by Pittsburgh on May 13 after going 3 for 35, was 4 for 4 with a solo homer and RBI double in the 4-2 win over Venezuela that earned him a trip to the Tokyo Games. (AP Photo/Carlos Osorio, File)

While most Olympic events are a competition among the best, the better you are in baseball, the less of a chance you have of playing for gold.

Major League Baseball refused to allow players on 40-man rosters to participate in the six-nation Olympic tournament, and many top prospects who technically are eligible are discouraged by their clubs, who don’t want to risk injury and prefer they remain available if needed by big league teams.

Rosters for the Olympics remain in flux. Israel lost catcher Ryan Lavarnway when the Indians brought him up from Triple-A Columbus in late June after Austin Hedges went on the concussion injured list. Israel manager Eric Holtz, already without Baltimore pitcher Dean Kremer, was hoping to get Lavarnway back because his team’s opener against the United States on July 30.

“Our guys are playing all over the place. But it’s not like a 162-game season where we have time to work on stuff,” Holtz said. “We’ve got to put stuff together and basically treat this like a 12-year old travel tournament, right, where it’s win or go home.”

Host Japan is favored to win. The Central and Pacific leagues are stopping their seasons between July 14 and Aug. 13 for the Olympic tournament, which runs from July 28 to Aug. 7.

Masahiro Tanaka, back in Japan with the Tohoku Rakuten Golden Eagles after seven seasons with the New York Yankees, is the only holdover from the 2008 Japan team that lost to the U.S. 8-4 in the bronze medal game.

The U.S. expected to announce its roster July 2, and American manager Mike Scioscia anticipated changes from the group that earned the berth at the Americas qualifier on June 5, That team had just one holdover from the players who failed to qualify at the Premier12 tournament in November 2019: pitcher Brandon Dickson.

Todd Frazier, a 35-year-old infielder released by Pittsburgh on May 13 after going 3 for 35, was 4 for 4 with a solo homer and RBI double in the 4-2 win over Venezuela that gained the trip to Japan.

While teams do scouting that leads to defensive shifts, these games don’t have Statcast, the modern metrics system that has changed how Major League Baseball is played. That means no spin rates, exit velocities and launch angles.

“It goes to show you you really don’t need most of that stuff,” Frazier said. “It’s baseball at the end of the day. You play for your country. You play for pride. We didn’t hit on the field. We just hit in the batting cage -- until our hands bled, to be honest with you. So we brought it back to youth days. Hit it. It doesn’t matter who’s throwing. Next guy up in line. And it really does go to show you guys that honestly, that guys really don’t need video. All we need is a bat and a ball and a glove and the determination to be the best player you can be.”

There are two groups of three in the first round, which determines seeding for the knockout stage. The opener will be played in Fukushima, about 180 miles north of Tokyo, and the rest of the baseball tournament at Yokohama, about 20 miles south of Tokyo.

The U.S. plays in Group B against Israel on July 30 and South Korea on July 31. Japan, the Dominican Republic and Mexico are in Group A.

A double round-robin starts Aug. 4, and the final is Aug. 7.