Britain's Johanna Konta to miss Olympics due to COVID-19 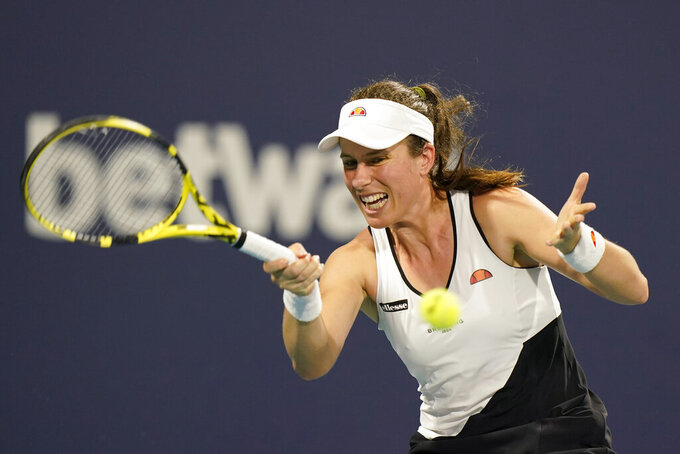 FILE - In this March 27, 2021, file photo, Johanna Konta of Britain, returns to Petra Kvitova of the Czech Republic, during the Miami Open tennis tournament in Miami Gardens, USA. Johanna Konta won't compete at the Tokyo Olympics after testing positive for COVID-19, she said Tuesday July 13, 2021, two weeks after missing Wimbledon because a member of her team had contracted the coronavirus. (AP Photo/Wilfredo Lee, File)

LONDON (AP) — Johanna Konta of Britain won't compete at the Tokyo Olympics after testing positive for COVID-19, she said Tuesday, after being dropped from Wimbledon just over two weeks ago when a member of her team contracted the virus.

The three-time Grand Slam semifinalist announced on Twitter that while self-isolating as a close contact, she developed symptoms and subsequently tested positive.

“As a result, I have been unable to train for the last two and a half weeks and sadly, this has put my body in a situation where I am unable to ask it to be fully ready in time for the Olympic Games in Tokyo,” wrote Konta, who is ranked 38th.

The opening ceremony is in 10 days.

The Australian-born Konta competed in the Rio de Janeiro Olympics in 2016, saying Tuesday it was “one of my most treasured memories from my career so far.”

The 30-year-old Konta had been required to self-isolate for 10 days after a member of her team tested positive just before Wimbledon.

“I'll be doing my best to get myself back to full health and fitness and ready to be competing again soon,” she wrote.

Konta is one of many high-profile tennis players to miss the Tokyo Games. Roger Federer also announced Tuesday that he would miss the games, citing a setback with his knee.