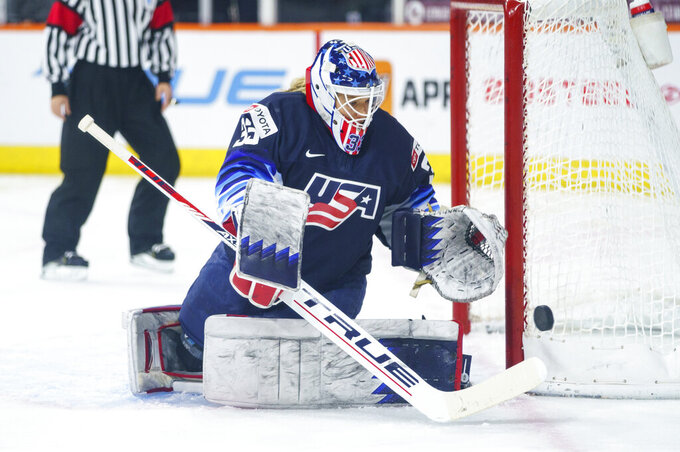 United States' Alex Cavallini knocks away the puck during the first period of the team's hockey game against the Canada, Friday, Oct. 22, 2021, in Allentown, Pa. (AP Photo/Chris Szagola)

ALLENTOWN, Pa. (AP) — Coach Troy Ryan could overlook how Canada’s women’s hockey team sagged in the second period in resuming its cross-border rivalry against the United States on Friday night.

What mattered, is how his team responded with Emily Clark scoring twice in the third period to secure a 3-1 victory in Game 1 of a nine-game pre-Olympic Rivalry Series between the two nations.

“Yeah, that’s just one of those periods that we’d like to have back,” Ryan said about a 20-minute stretch in which Canada was outscored 1-0 and outshot 15-3. “But also in a process like this, we’re glad those things happen because then you can see how your team responds by it. And I think they answered that call.”

Set up in the right circle, Clark scored the go-ahead goal by sneaking a shot inside the right post 5:05 into the third period, and then sealed the win by scoring into an empty net with six seconds left.

Sarah Fillier also scored and Emerance Maschmeyer made 28 saves in the first meeting between the world’s top hockey powers since Canada’s 3-2 overtime victory in the gold medal game of the women’s world championships in Calgary, Alberta, on Aug. 31. The Canadians have won three straight meetings to mark their best streak since a five-game run before a 3-2 shootout loss in the gold-medal game at the 2018 Winter Games in South Korea.

Though the loss stung, U.S. captain Kendall Coyne Schofield saw encouraging signs from a team shaking off the rust following a two-month break in preparing to defend its Olympic gold medal.

“The best part is we have them eight more times,” Coyne Schofield said, with the two nations next set to meet again in Hartford, Connecticut, on Monday. “We didn’t get the result we wanted today, but I think we have an awesome opportunity to learn from this game, learn from our mistakes, learn from the things we did well and take that into Hartford.”

Alex Cavallini stopped 16 shots in the loss. Hayley Scamurra scored for the U.S. and nearly had the tying goal off Rebecca Johnston’s turnover in Canada’s end before having her backhander turned aside some 20 seconds after Clark scored her first goal.

“Had that chance, I’ve just got to bury it,” Scamurra said. “But I’m proud of the way our team kind of battled back after that goal. And I think we took it to them. And we’ve just got to find a way to score.”

The teams traded power-play goals through the first 40 minutes, with Canada opening the scoring on Fillier’s 13:39 into the first period, and 29 seconds after Abby Roque was penalized for tripping.

Off the faceoff in the U.S. zone, Canada worked the puck back to Erin Ambrose, who’s shot from the blue line was tipped in front by teammate Johnston. Cavallini made the stop, but was unable to control the rebound, which dribbled to her left, where an untouched Fillier swept it into the open side.

Scamurra tied it 11:21 into the second period, when Maschmeyer stopped Caroline Harvey’s point shot. Scamurra spun away from Renata Fast in front and roofed the rebound inside the crossbar.

Because of the coronavirus pandemic shutting down women’s hockey for 18 months, the outing was Team USA’s first against an international opponent on U.S. soil in 622 days, dating to a 4-3 overtime win over Canada in a rivalry series game played at Anaheim, California, on Feb. 8, 2020.

The first period wasn’t over before the bad blood between the two teams became apparent with U.S. forward Hilary Knight exchanging shoves with Canada’a Melodie Daoust following a scramble in front of the Canadian net with three seconds remaining.

NOTES: U.S. G Maddie Rooney, who missed the world championship after suffering a lower body injury, is being eased back into action and not expected to play until the team travels to play a three-game series against Russia in Northern Ireland starting on Nov. 9. ... Canada D Blayre Turnbull, who broke her fibula during the gold-medal celebrations in August, has resumed skating but there is no timetable for her return. ... Coyne Schofield played in her 150th international game, including the Under-18 and -22 levels.