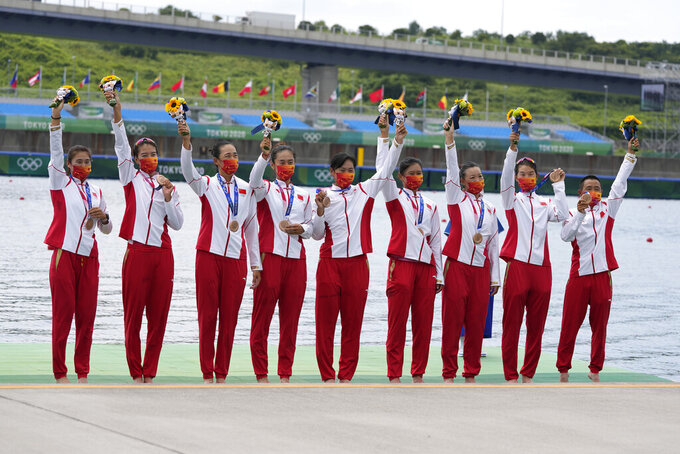 TOKYO (AP) — An American reign is over, undone by Canada. New Zealand, meanwhile, showed off a big-time blend of speed and power on the final day of Olympic rowing that will be celebrated Down Under for a long time.

Canada ended the U.S. run of three consecutive gold medals in the women's eight and the Kiwis claimed three medals, including Emma Twigg's long-awaited victory in the women's single sculls and a win in the men's eight, to dominate the last day of rowing at the Sea Forest Waterway.

With the U.S. finishing fourth in both the women's and men's eight, the American rowers leave Japan empty-handed and facing questions about the leadership and culture within the men's program.

Canada toppled the Americans with a commanding start-to-finish win ahead of New Zealand and China. The U.S. boat found itself dropped by the leaders early in the race and was never in medal contention.

Canada won its first gold medal in women's rowing since 1996.

“I just really believed in our boat. The women really believed in me,” said Canadian coxswain Kristin Kit, who got the ceremonial toss in the water after the medal ceremony. “The strength of this crew showed through, because every time I made a move call it responded.”

Teammate Kasia Gruchalla-Wesierski marveled at just being on the medal podium. She had been injured in a serious bicycle crash shortly before the Olympic team was selected.

“Six weeks ago I was told I was lucky to be alive, and when they made the team announcements I was literally limping out of the hospital with a broken collarbone,” she said. “I just can’t believe I’m here.”

The U.S. slip had been coming. The Americans had been beaten at the world championships in 2017 and 2019, and a COVID-19 outbreak hit their program in early 2020. But not medaling in Tokyo at all was a shock.

"The goal has always been the same: Put it all out there and go as fast as you can,” said Meghan Musnicki, one of only two in the boat with Olympic experience.

Emma Twigg of New Zealand earned an emotional win in the women's single sculls after finishing fourth at the 2012 Games in London and again in 2016 in Rio di Janeiro.

Twigg bolted out of the start while Russian rower Hanna Prakatsen lagged in last place early. Prakatsen made a push over the final 500 meters but couldn't catch Twigg, who only extended her lead as she approached the finish line.

Twigg even had time to look over her left shoulder to see how far she had to go, then gave two more strokes after the finish line just to make sure.

“I didn’t hear the buzzer, so I crossed the line and thought that I had stopped too early,” said Twigg, who fought back tears as she received her medal.

New Zealand's big day was just beginning. After Twigg's win and the silver medal in the women's eight, the Kiwi men claimed the men's eight gold medal, holding off Germany by 0.96 seconds in a sprint to the finish.

“The way that we were rowing it was long and strong. It didn’t feel hectic in my seat. It was a comfortable ride," said Hamish Bond of New Zealand.

Stefanos Ntouskos of Greece won the men's single sculls to claim his country's first medal of the Tokyo Games. Ntouskos switched from a lightweight quadruple sculls boat to the single in 2019, and he said the extra year of training due to the delay caused by the pandemic helped him prepare.

“I was in better shape this year,” Ntouskos said.

China's bronze medal that clipped the U.S. in the women's eight was a surprise. That medal, coupled with China's gold in the women's quadruple sculls, could portend a new power rising. The Chinese team is led by team high performance director Sir Steven Redgrave, a former rowing star for Britain.

“We've got athletes, we've got finance," Redgrave said. “They've got the capability of being the best in the world. They have to believe it and today will go a long way to doing that.”

The American men head home under a cloud.

U.S. Rowing is awaiting the results of a monthslong assessment commissioned by the U.S. Olympic & Paralympic Committee of the sport’s national rowing programs, including longtime men's coach Mike Teti, who has been criticized by some rowers for what they call his intense and intimidating style. Some have accused him of making physical threats and verbal attacks.

Asked about Teti's future after the Games, U.S. Rowing said it would be inappropriate to comment before the assessment is complete. Teti has previously said he believes he has coached “fairly, with the athletes’ well-being in mind."

American coxswain Julian Venonsky said after the Olympic final he has “total confidence in U.S. Rowing and our coaching staff.”

"I'm just proud of what we did and we did it together,” Venonsky said.