Canada wins softball bronze, appeals to IOC to stay for '24 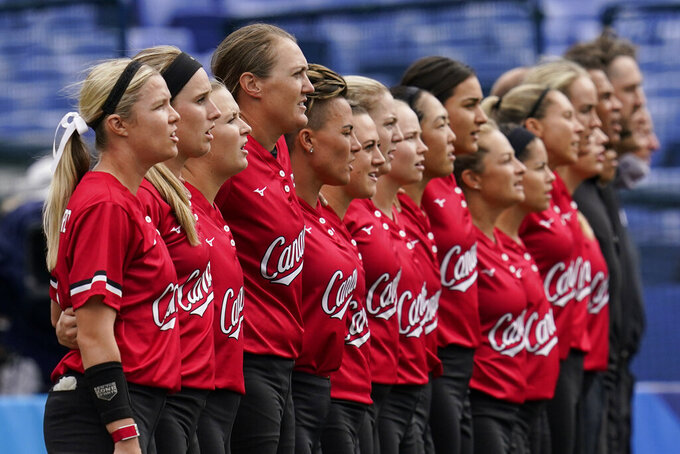 Members of team Canada stand during the playing of their national anthem ahead of a softball game against Mexico at the 2020 Summer Olympics, Tuesday, July 27, 2021, in Yokohama, Japan (AP Photo/Sue Ogrocki)

YOKOHAMA, Japan (AP) — Canada had just won its first bronze medal in softball, the high point of the players' careers, and the reality sunk in that there will be no chance to play in the Olympics again until at least 2028.

Dropped by the International Olympic Committee for 2012 and 2016 and restored for this year, softball will be skipped again in 2024.

“I think a terrible injustice was done to women's softball when it was taken out in 2008,” Canada coach Mark Smith said after Tuesday's 3-2 win over Mexico.

“When you look at the parity that was displayed here this week, how close the games were across the board, including Italy, who didn't win a game, you didn't know who was going to win until you really got to the last (outs). When you look at other sports, and I'll use women's hockey as an example, you know who's going to win before the tournament starts.”

Canada won behind 2 1/3 innings of scoreless, one-hit relief from Danielle Lawrie, the sister of former major leaguer Brett Lawrie. The Canadians asked the IOC to reverse its decision to exclude softball from the Paris Games.

“When you look at equity, there's certainly not as many female athletes at an Olympic Games as there are men's," said Smith, Canada's coach since 2009. "From my perspective, it was absurd that it was ever taken out. I think it's more than made its case for why it should be in. I believe that had COVID not existed, you would have had packed stadiums to watch this game played. And I don't know how it's possible that women's softball shouldn't be returned to the Olympic platform and become a core sport because it's more than proven its value.”

This was the seventh of 16 games in the tournament decided by one run. Two others had two-run margins.

"I think we’ve really done a great job at building the sport around the world and making it become more competitive," said Canada's Kelsey Harshman, who broke a 2-2 tie in the fifth with a sacrifice fly.

Lawrie (1-1), a veteran of Canada’s 2008 Olympic team and the 2009 and ’10 USA college player of the year at the University of Washington, relieved with runners at the corners in the fifth and retired Victoria Vidales on a groundout. Lawrie struck out four, fanning Brittany Cervantes to end it.

In a game played in intermittent light rain, Emma Entzminger put Canada ahead with a two-run single in the second off Danielle O’Toole (0-2), but Mexico tied the score on RBI singles by Cervantes in the third off starter Sara Groenewegen and by Suzy Brookshire in the fifth against Jenna Caira.

“I hope that we were able to show a little glimpse of that to the world and especially to the IOC, and I hope that they can take that into account of how many eyes are watching and how many female athletes love this sport.”

No. 9 hitter Janet Leung beat out an infield single to shortstop leading off the bottom half of the fifth and Victoria Hayward legged out a bunt single. Larissa Franklin sacrificed, and Harshman flied to left, sending Leung home standing up as the throw was cut off.

Canada went 4-2, finishing behind the U.S. (5-0) and Japan (4-1). The Americans and defending champion Japan were to meet later Tuesday for the gold medal.

Jenn Salling was 8 for 14 with six walks and five RBIs for Canada, which had threatened in the third when Hayward was thrown out at the plate by O'Toole on Harshman's comebacker.

“What you saw today was character and culture step up when it had to and get the job done," Smith said. “We got a lead. We gave up that lead. We had an opportunity to score a go-ahead run. They made a great play at the plate. That would have been enough for a lot of teams to pack it in.”

After the last out, players saluted Canada chef de mission Marnie McBean, their one-woman cheering section in the nearly empty stadium, who won three gold medals in rowing in the 1990s.

“That was the best game I’ve been a part of,” Cervantes said. “People now know who we are.”

O’Toole’s face was flushed with emotion while she watched the final outs.

“Just thinking about alternative outcomes,” she said. “I’m thinking I’d like to throw one more inning. I came out of that last inning and Entzminger hit that popup, and I’m thinking I don’t want that to be my last out here at the Olympics.”