Captain America: Durant makes sure gold medal stays with US 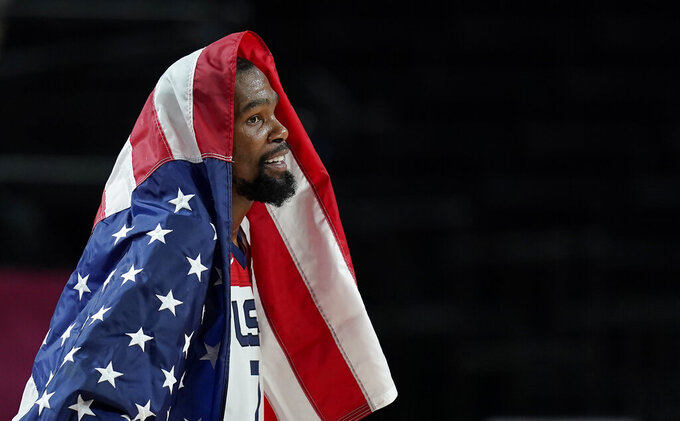 SAITAMA, Japan (AP) — With the gold medal in jeopardy, the U.S. knew where to turn to protect it.

It could only be Captain America.

Even before he was wrapped up in a flag that looked like a cape, Kevin Durant played the part of a hero for the U.S. basketball team — again. And if the French wanted to leave with the gold medal, they were going to have to take it from his grip.

That's what Durant did to close out the gold-medal game Saturday. With a three-point lead and under 10 seconds remaining, the Americans passed it in to Durant, who was fouled and calmly sank the two free throws with 8.8 seconds remaining for the final points in an 87-82 victory.

Durant finished with 29 points, just off the 30 he scored in the last two Olympic gold-medal games. The four-time NBA scoring champion is in the discussion as the best player in the league.

As for the best player in Olympic basketball, that debate seems to have ended in Japan.

“That’s a special, special man, and he carried this team like we needed him to, like he’s supposed to coming back for his third Olympics, all-time USA scorer,” said U.S. forward Draymond Green, Durant’s former teammate in Golden State. “There’s been a lot of great players to don this jersey, and he’s No. 1 and that’s a special thing.”

Durant, who passed Carmelo Anthony earlier in the Olympics to become the leading scorer in U.S. men's history, joined Anthony as the only three-time gold medalists in men's basketball.

Durant couldn't choose which Olympics is the most special, because to him they all are.

It might have been a group of silver medalists without Durant's greatness. Unlike his last two Olympics, when he played with Anthony and other experienced superstars, this was a team filled with international rookies, a team with a roster that wasn't set until shortly before the tournament.

While Durant could largely focus on being a scorer in his previous Olympics, the Americans needed him to be their leader this time. He showed his teammates what it took, with coach Gregg Popovich saying watching him was like “osmosis” for them.

“He’s not special because he’s so talented. It’s the way he works on his game is more impressive, the relationships he builds with his teammates,” Popovich said.

Durant was a constant comfort during nervous times for the Americans throughout the tournament. When the U.S. struggled early Saturday, Durant scored 12 points and had 21 by halftime.

“I think he’s the best scorer in basketball and he’s going to do what he does, especially on the biggest stage like the Olympic games,” France center Rudy Gobert said.

Durant takes tremendous pride donning the red, white and blue. And his commitment to USA Basketball has been invaluable.

Another flurry early in the third quarter after France cut it the deficit to four provided a double-digit lead, room it turned out the Americans would need to hold on for their fourth straight gold medal.

“Kevin Durant has been one of the great players ever to play for USAB,” outgoing managing director Jerry Colangelo said, getting choked up and adding, “he’s very special.”

Colangelo recalled meeting Durant while the forward was spending one season at Texas in 2006-07, inviting him to the U.S. training camp that summer. Durant quickly accepted.

“He said, ‘I’ll be there,’ and it’s never changed,” Colangelo said.

That's partly because Durant loves playing with guys he can only watch and compete against during the NBA season. He said each team he's been on — including a gold medal-winning squad in the 2010 world basketball championships — builds a bond that always remains.

It's unknown if he could had played had the Olympics been held as scheduled in 2020. Durant had ruptured his Achilles tendon in the 2019 NBA Finals and sat out the 2019-20 season. He was working his way through rehabilitation when the Olympics were postponed because of the coronavirus pandemic.

Given an extra year, Durant signed on again even after a difficult NBA season. He battled a hamstring injury that limited him to just 35 games before his Brooklyn Nets lost a grueling seven-game series against eventual champion Milwaukee in the second round of the playoffs.

He's going to be staying with the Nets for the long term after agreeing to a four-year, $198 million contract extension hours before the gold-medal game.

Durant didn't rule out joining the Americans again in 2024 in Paris, when the French would surely love to avenge this loss on home soil.

France beat the U.S. in the opener of these Olympics and nearly beat the U.S. again Saturday, further proving that the world's best teams are catching up to the Americans.

Nobody, though, is catching up to Durant on the world stage.

“He’s fearless. I’ve said it before: He’s the most skilled basketball player ever. I mean that,” Kerr said. "There’s nobody that’s his size, 6-11, that combines shooting and ballhandling skills and athleticism. You’ve never seen it before.