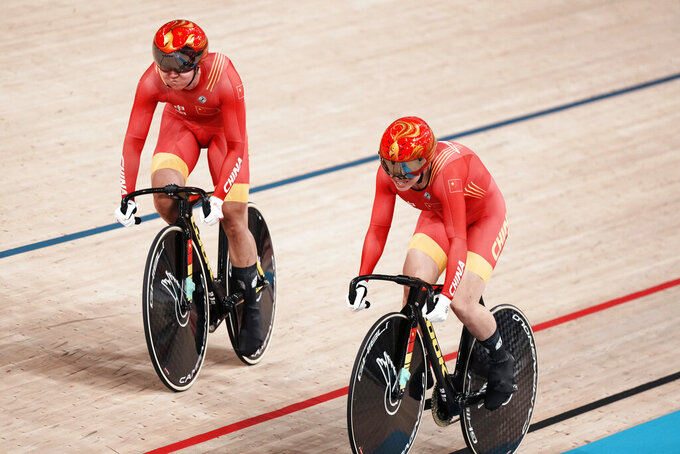 IZU, Japan (AP) — The dominant Chinese women's sprint team looked a bit vulnerable at the world championships last year in Berlin, when Germany took the gold medal on home soil and the reigning Olympic champions had to settle for bronze.

That was the world championship, though.

The Chinese are still the queens of the Olympics.

After breaking the world record in the heats, the duo of Bao Shanju and Zhong Tianshi beat the German team of Lea Sophie Friedrich and Emma Hinze to win the gold medal at the Tokyo Olympics on the first day of track cycling Monday.

“The time was amazing for us,” Zhong said of the world record, “but the final, we were just thinking, ‘Just do it.’”

They certainly did it.

Bao and Zhong got out to a quick start and led by .325 seconds at the midway point of the sprint. But the German team came on strong at the end, and the margin was a razor-thin 85 thousandths of a second.

“Of course we wanted to win the gold medal. We thought we could make it. We were motivated to do it,” said Heinze, who teamed with Pauline Grabosch at worlds. “We tried our best and they were just super fast.”

In the race for bronze, Daria Shmeleva and Anastasiia Voinova representing the Russia Olympic Committee beat Laurine van Riessen and Shanne Braspennincx of the Netherlands. The Russian duo won silver five years ago in Rio.

The Chinese have been the standard in women’s team sprint since the event debuted at the Olympic program.

At the 2012 London Games, the team of Gong Jinjie and Guo Shuang broke the world record in qualifying, then lowered it again in the first round. The duo then appeared to win the gold medal, but they were relegated to silver because of an early exchange, allowing the German team of Kristina Vogel and Miriam Welte to claim the event’s first gold medal.

The Chinese didn’t make the same mistake in Rio. That time, the new pairing of Gong and Zhong broke the nation's own world record in the heats and cruised carefully past the team representing Russia for their long-sought gold.

Earlier Monday, Germany shattered the world record in the women's team pursuit at the Izu Velodrome, setting a time of 4:07.307 to qualify first in an event most believed would be a showdown between the British and Americans.

The team of Franziska Brausse, Lisa Brennauer, Lisa Klein and Mieke Kroeger was on a record pace from the first lap of the 4-kilometer timed ride. The group easily eclipsed the mark of 4:10.236 that Britain set at the Rio Games.

“We fully knew the world record was going to be broken, and we fully expected it to be the Australians or the Americans,” Britain's Elinor Barker said. “It's unfortunate for us that Germany was so much faster.”

The British team of Barker, Katie Archibald, Laura Kenny and Josie Knight also went faster than their previous mark, qualifying second in 4:09.022. The world champion U.S. was third in 4:10.118 and Italy was fourth in 4:11.666.

Germany will face Italy and Britain will match up with the U.S. on Tuesday for spots in the gold medal match.

In the men's team pursuit, Denmark broke the Olympic record with a time of 3:45.014, just off the world record pace they set last year in Berlin. The team of Lasse Norman Hansen, Niklas Larsen, Frederik Madsen and Rasmus Pedersen lowered the Olympic mark of 3:45.895 that Italy set earlier in qualifying.

Australia, the silver medalists in Rio, had to scratch its qualification run when a touch of wheels sent Alexander Porter to the wood surface in Turn 1. The rules allowed them another chance, but the energy expended on their initial run cost them, and they were unable to catch two-time defending gold medalist Britain for the final spot in the medal round.

“When you land on your face at 65 kilometers an hour and you have half an hour to do it again, that's absolutely amazing,” said Simon Jones, the performance director for Australia's team. “We did pretty well considering. We'll come back tomorrow and try to go as quickly as we can go.”

Denmark will face Britain and Italy will go against New Zealand on Tuesday for spots in the gold medal race.