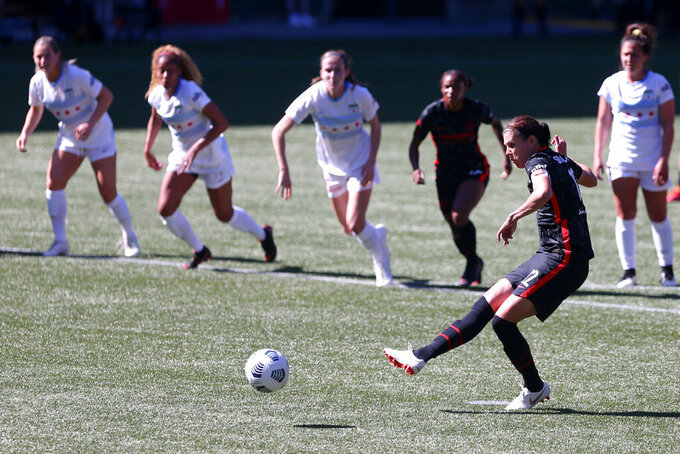 Thorns forward Christine Sinclair (#12) scores on a penalty kick to give the Portland Thorns a 2-0 lead over the Chicago Red Stars in an NWSL match at Providence Park on Sunday, May 16, 2021. (Sean Meagher/The Oregonian via AP)

Christine Sinclair, who holds the all-time record for international goals among both men and women, leads Canada's roster for the Olympics.

Coach Bev Priestman named her 18-player squad for the Tokyo Games on Wednesday. The Canadian women are making their fourth straight Olympic appearance and have won back-to-back bronze medals.

As captain of the Canadian team, Sinclair is making her fourth Olympic appearance. She has appeared in 15 overall Olympic matches, scoring 11 goals.

At the 2016 Brazil Games, Sinclair scored the game winner in a 2-1 victory over Brazil for the bronze.

“The Olympic Games have played an important part in the history of Canada Soccer’s Women’s National Team, and I am looking forward to do whatever I can to help take this team back to the podium and make history again," she said in a statement. "Our team is in good spot, we are excited, we are hungry, and we are ready to go.”

Sinclair, 38, has 186 goals in 299 appearances with the national team. Her club team is the Portland Thorns of the National Women's Soccer League.

Included on Canada's roster is Quinn, a midfielder who came out as transgender and nonbinary last year. Quinn is making a second Olympic appearance.

“Ultimately, what it came down to for me is that good feel of who I think can go and change the color of the medal,” Priestman said during a conference call with reporters. "And that’s the team that I got to. But as you can tell, it definitely wasn’t easy, which is a credit to all the players.”