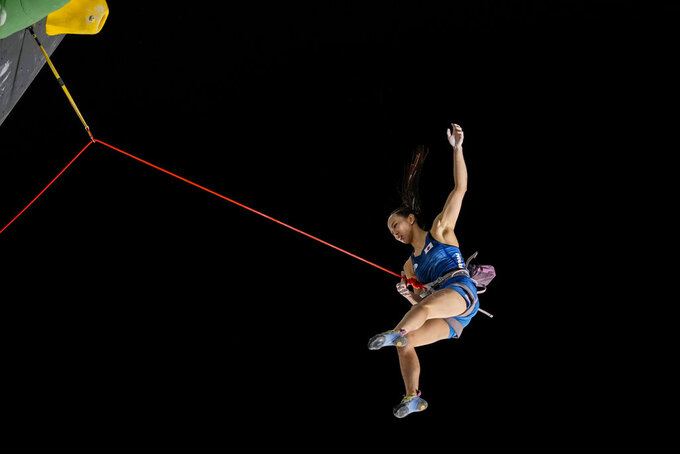 The debate over climbing's GOAT is over.

Garnbret lived up to her billing as the world's best female climber, dominating at the Tokyo Games on Friday night to earn Olympic gold.

“A lot of people have said that,” Garnbret said. “Now I can say that myself."

Garnbert finished fifth in the speed discipline, her weakest event, then topped two of three “problems” to win bouldering. She capped a muggy night at Aomi Urban Sports Park by reaching 37 holds to win lead and wrap up gold.

The six-time world champion finished with five points — the total of her finishes multiplied together — to win by 31 points.

“This is the first time climbing is in the Olympics and it's the first Olympic gold medal, so this means a lot to me,” she said. “And I know how much I put in.”

How much of a rout was it?

Japanese teammates Miho Nonaka and Akiyo Noguchi, two of Garnbret's top challengers for gold, were left looking way up at Garnbret in the standings. Nonaka finished with 36 points to take silver and Noguchi had 48 to take bronze.

A nice showing for the home country, just not enough to top Garnbret's brilliance.

The inclusion of speed in climbing’s Olympic debut was met with pushback by most of the competitive climbing community.

The IOC is only awarding two medals in Tokyo, one for each gender, and wanted something fast moving to catch TV viewers’ attention. The decision didn’t sit well because speed is a specialty discipline and including it in the Olympic program was like asking marathoners to also run a sprint if they want to medal.

The theory heading into Tokyo was that the top lead and boulder climbers would stand the best chance by winning one of those two disciplines to offset a low finish in speed.

Alberto Ginés Lopéz tossed that thinking off the wall, riding his win in speed to the men’s gold medal. He also happened to do well in the other two disciplines, finishing seventh in lead and fourth in bouldering.

Garnbret is a lot like Ondra in that speed is her weakest discipline, but actually had a decent speed finish in the finals, winning two races to take fifth.

Then she showed why she’s considered the world's best climber.

“Once I was fifth, it opened everything up for me,” Garnbret said.

Blessed with a puzzle-solving mind and the athletic ability to pull the pieces together, she's won six world championships since 2016. She was the first woman to win two disciplines at one world championships, in 2018, and had a perfect 2019 World Cup season, winning all six bouldering events.

Once in Tokyo, she made the Olympic bouldering “problems” look like playground equipment in qualifying, topping all four in one pass.

Determined not to be shown up again, the route setters turned diabolical for the finals, setting up three problems that sent climbers off like, well, boulders.

She need four attempts, but completed the first boulder and “flashed” the second one, topping it in one try. The third problem was too much for even Garnbret, but winning bouldering put her in the all-around lead.

Garnbret grabbed two more holds than anyone else to win lead and prove, yet again, she's the queen of the artificial wall.

“If I ever thought I was under pressure at World Cups or world championships, the Olympics are so different,” Garnbret said. “This is so much pressure.”

Unfortunately for the rest of the climbers, Garnbret thrives under pressure. That's why she's climbing's GOAT.