'Cover up of cover-up' still led to downsized Russian ban 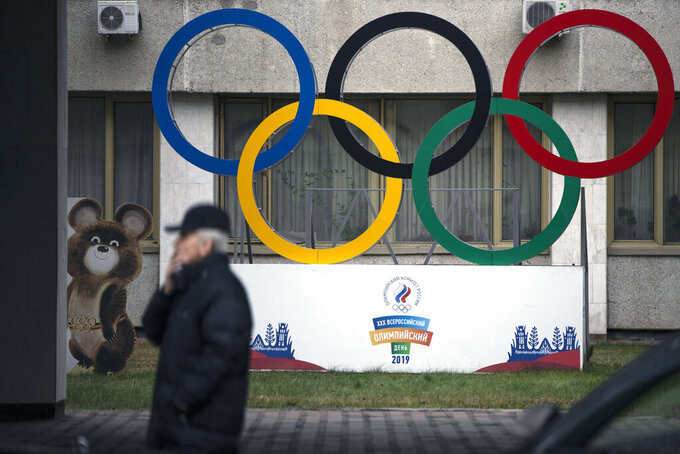 FILE - In this Nov. 28, 2019 file photo Olympic Rings and a model of Misha the Bear Cub, the mascot of the Moscow 1980 Olympic Games, left, are seen in the yard of Russian Olympic Committee building in Moscow, Russia. In the report detailing its decision to shorten Russia's ban from the Olympics, the highest court in sports blasted that country's leaders for engaging in “a cover up of the cover-up” in a desperate attempt to deny their culpability, but reduced the punishment nonetheless, Wednesday, Jan. 13, 2021. (AP Photo/Pavel Golovkin, file)

The highest court in sports blasted Russia for engaging in “a cover up of the cover-up” in another desperate attempt to deny culpability for a state-sponsored doping scheme, while also justifying its decision to reduce the country's punishments at the next two Olympics.

The Associated Press obtained an advance copy of the Court of Arbitration for Sport's 186-page decision for the case it ruled on last month between the Russians and the World Anti-Doping Agency. The decision was made public Thursday.

WADA had proposed a four-year ban for Russia for manipulating potentially inculpatory data it held in its Moscow lab for years before handing it over to investigators early in 2019. CAS reduced the sanction to two years.

Despite alleviating that and other sanctions, the CAS arbitrators denounced Russia while once again laying out the intricate details of the plot to manipulate the lab data. The panel concluded the fabrications mean “it will never be possible to know the number of cheating athletes or officials who may have escaped detection.”

“The manipulations show that the Russian authorities remain as willing as ever to interfere with, and corrupt, the anti-doping system,” the panel said.

Still, CAS called for more lenient terms than WADA wanted, lowering the burden for Russian athletes to gain eligibility to compete as neutrals at the upcoming games in Tokyo and Beijing and softening a proposed ban on Russian government officials.

The panel said it cut the sanction in part because WADA only ever intended the ban to include one Summer and one Winter Olympics. (Four years would have brought the Paris 2024 Games into play, as well.) The coronavirus pandemic forced the IOC to reschedule the Summer Games for 2021, and CAS said the reduction would also help avoid further disruptions to preparations “particularly in the light of disruption occasioned by the COVID-19 pandemic.”

“Further, the panel acknowledges that imposing severe consequences upon an entirely new generation of Russian athletes may go further than necessary to achieve the objectives of the (WADA sanctioning rules.)," the panel wrote.

When the decision was announced last month, both parties took victory laps — WADA because CAS essentially agreed with every part of its case, and Russia because, despite that, it had its sanction reduced.

CAS said the reduction should not be read as "any validation of the conduct of Rusada or the Russian authorities.”

But the release of the full report, which rehashes details of Russia's plot to erase, rewrite and sometimes completely make up new files in the 23 million megabyte cache of information it held at the Moscow lab, sends a mixed message.

For instance, one of Russia's biggest victories was the loosening of conditions for Russian athletes to compete as neutrals. WADA had insisted athletes be able to prove they hadn't been implicated in Russia's non-compliance. But CAS ruled that was too high a burden. Why? Because much of the proof of their innocence might have been tucked in parts of the 23 million megabytes that had been compromised.