COVID cancels the Olympic surfing beach party that never was 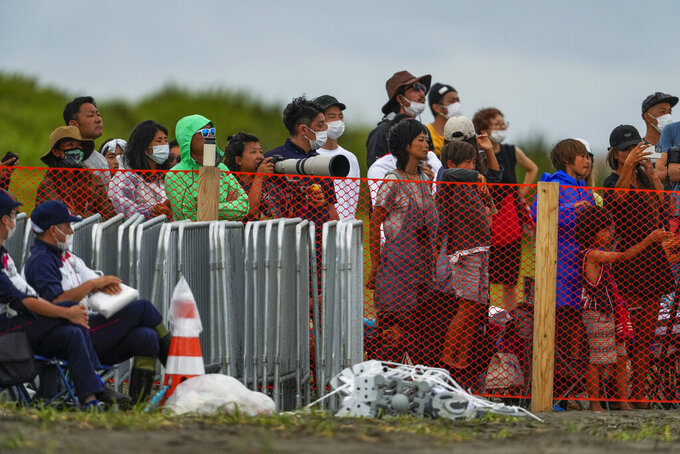 People watch from behind a security fence during the final day of the surfing competition at the 2020 Summer Olympics, Tuesday, July 27, 2021, at Tsurigasaki beach in Ichinomiya, Japan. The Olympic beach party that never was may be the only sore spot for surfing’s long-awaited debut that finished triumphantly this week. Some local Japanese fans and beachgoers did manage to find a way to lay eyes on the athletes and the competition site once the games began. (AP Photo/Francisco Seco)

ICHINOMIYA, Japan (AP) — The Olympic beach party that never was may be the only sore spot for surfing’s long-awaited debut that finished triumphantly this week.

An eight-day Olympic Surfing Festival was supposed to “revolutionize” the Olympic experience, organizers said, because it was designed to be an initiation to both the beloved niche sport and its famous laid-back lifestyle.

“It was a view of the lifestyle and the culture of surfing,” said Fernando Aguerre, president of the International Surfing Association, the sport’s Olympic governing body. “So there was yoga, there was environmentalism, classes on how to be environmentally sound as a person. It was a surf initiation.”

Nearly all of the 6,000 tickets for each day had already been sold at $25 each by the time the International Olympic Committee confirmed there would be no fans at the Tokyo Games, according to the ISA.

The plans for Tsurigasaki beach, about 60 miles east of Tokyo, called for an elaborate event from the beach to the dunes.

It would have featured access to the beach with a view of the surf zone where fans could lay out on the sand to watch the world’s best surfers shred waves in the battle for gold, silver and bronze.

The festivities beyond the competition viewing area would have included live music, organic food and green juices, a booth showing the technical mechanics of surfing — how a surfboard is pushed by waves — as well as a historical exhibit focused on Olympian Duke Kahanamoku, the godfather of modern surfing.

The format of competitive surfing made sense for a festival concept, as organizers laid out a plan for at least three days of competition over an eight-day window. That’s because surfing is uniquely and completely dependent on both the unpredictable ocean and uncontrollable weather, and whether they hit the water or not is usually determined the morning of.

Aguerre said the festival elements ensured there would be something for visitors to enjoy on the days off, known as lay days.

In the end, surfing’s debut was held swiftly over the first three days of the competition period thanks to good waves brought on by a tropical storm.

And some local Japanese fans and beachgoers did manage to find a way to lay eyes on the athletes and the competition site once the games began.

At any given time, there were dozens of them crowded around a plastic orange security fence that drew the line for a 600-meter security perimeter beyond the stretch of dark sandy beach of the surf zone located between two jetties.

From there, the locals could see the beach and athletes moving into the water, as well as the coaching staff, journalists and volunteers standing by, though organizers say they couldn't see Carissa Moore and Italo Ferreira win the first-ever golds.

As the Games seek to draw in younger fans, the surfing festival could have established a new way to bring good party vibes to the every four years elite sporting event. Aguerre said the ISA's festival plans prevailed with IOC approval despite some “old school” Olympic organizers who challenged the surfing party as a distraction from the athleticism on display.

“For me, it’s very sad because this was a very, very new idea,” Aguerre said. “This is not something that happens at Olympic events.”