Djokovic knows 'history is on the line' at Tokyo Olympics 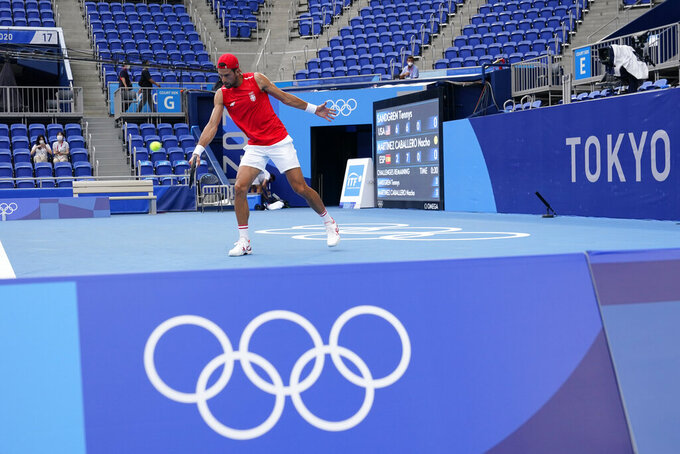 TOKYO (AP) — Novak Djokovic knows how close he is.

Not just to creating history and becoming the first man to achieve a Golden Slam by winning all four major tennis tournaments and an Olympic singles gold medal in the same year.

Sure, that’s on Djokovic’s mind as he enters the Olympic tournament starting Saturday.

But it’s the bigger end product that would be the result of such an achievement that is weighing most heavily on him — surpassing Roger Federer and Rafael Nadal to be considered the greatest tennis player ever.

The goal is so great that Djokovic doesn’t even want to consider the consequences.

“I know that there is a lot of things on the line. I know there’s history on the line. I’m privileged and motivated to be in this position. I’ve worked very hard to be here. … But let’s talk about history if everything goes great here,” Djokovic added. “Right now all focus goes to the next challenge.”

In Serbia, the debate is already over.

Olympic committee chief of mission Natasa Jankovic introduced Djokovic at the team’s news conference as “the most successful tennis player ever.”

By winning Wimbledon this month, Djokovic matched Federer and Nadal with his 20th Grand Slam title — having opened the year by capturing the Australian and French Opens. He is the only one of them to have won each Slam twice. He is the only one to hold all four major titles simultaneously, something he did over the end of 2015 and start of 2016.

The only tennis player to achieve a Golden Slam was Steffi Graf in 1988.

“I’m not in touch with Steffi, but if you can connect her, I would be delighted to ask her how she did it,” Djokovic said, recalling how he briefly worked with Graf’s husband, Andre Agassi.

“When I was thinking about her (Golden Slam) I didn’t think that would be achievable. But right now it seems more and more realistic for me. Of course that’s one of the goals and dreams.”

Making matters more straightforward for Djokovic is that neither Federer nor Nadal are playing in Tokyo.

But that also was the case at last year’s U.S. Open, where Djokovic was disqualified for unintentionally hitting a line judge in the throat with a ball.

“I have not experienced too many big tournaments in the past 15 years without Roger and Rafa playing,” Djokovic said. “So it’s a little bit strange, to be honest, because I’m used to seeing at least one of them.”

Djokovic will open against No. 139 Hugo Dellien of Bolivia on the hard courts of the Ariake Tennis Park.

Half of the top 10 men’s players are not in Tokyo, with Dominic Thiem, Matteo Berrettini and Denis Shapovalov also missing for various reasons.

“But still, some of the best players in the world are here," Djokovic said. "(Daniil) Medvedev, (Stefanos) Tsitsipas, (Alexander) Zverev, (Andrey) Rublev. Those are the guys are in the top 6-7 in the world and they are the biggest candidates for winning a medal.”

Djokovic had openly considered sitting out the Olympics, having won a bronze medal at the 2008 Beijing Games.

In the end, his desire to represent Serbia and achieve something unique was too great.

“It’s the most special, most historic sports event in the history of sport,” Djokovic said of the Olympics. “Representing your country, being part of a collective team is something that I treasure. It’s something that encourages me personally and gives me a lot of confidence and great energy for my own personal performance.”