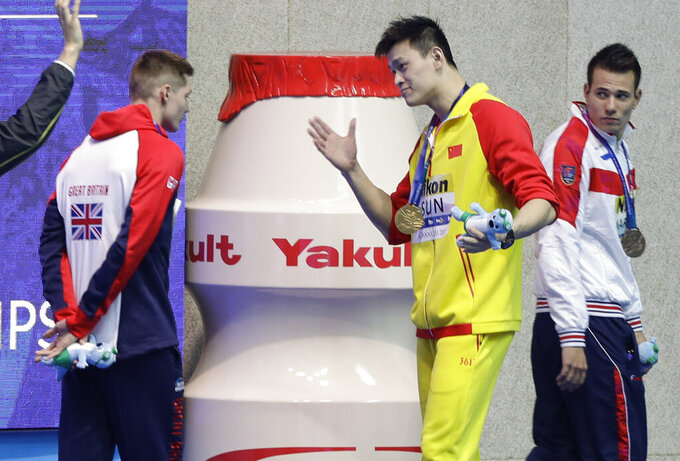 A survey of Olympic and other elite athletes across the globe found them more likely to believe in the work their own country's anti-doping agencies are doing when compared to that of global regulators at the World Anti-Doping Agency.

A total of 491 athletes spread across 48 countries were asked a series of questions about the overall effectiveness of anti-doping organizations, and the answers led to the following conclusions: WADA has work to do to gain their trust; national anti-doping agencies are more reliable than WADA; and there is not enough separation between WADA and the International Olympic Committee, which supplies half of the organization's funds.

The athlete advocacy group Global Athlete sponsored the survey, which, notably, did not garner any responses from Russia or China, where some of the most high-profile doping cases have emerged over the last several years.

Last month, Chinese Olympic swimming champion Sun Yang received an eight-year ban as the result of an appeal brought by WADA to the Court of Arbitration for Sport. WADA was applauded for standing up to swimming's international federation in that case. But its role in the ongoing Russian doping saga has been widely criticized. WADA refused to recommend a blanket ban of the Russian team for the upcoming Tokyo Olympics despite evidence of tampering with data that Russia handed over to help prosecute cases stemming from the country's original plot to cheat at the 2014 Sochi Games.

A WADA spokesman said the agency was not surprised at the responses and would take heed of the survey but also suspected that the questions “appear to be drafted in order to produce a particular response rather than in a neutral tone.”

“When it comes to an overall assessment of anti-doping system, we have long acknowledged that the polarizing Russian doping crisis, in particular, has had an impact on athletes’ perceptions,” WADA spokesman James Fitzgerald said.

Despite the steady drumbeat of headlines involving the Russia probe and others, 60 percent of respondents to the survey said they either completely or mostly trusted the international anti-doping system.

Among the entries in the comments section, where athletes were asked to expand on their thoughts about transparency and other issues:

—“Political processes within the WADA system are opaque, and the organisation has had numerous issues with corruption and conflict of interest in recent years.”

—"WADA seems to make decisions that many people in our sporting community disagree with which makes me think they aren't transparent and aren't representing the athletes fairly."

WADA responded by emphasizing that minutes (sometimes with redactions) to its executive committee meetings are published and that meetings of its highest decision-making body, the Foundation Board, are open to the public. (There is typically more posturing than drama at Foundation Board meetings, where decisions made behind closed doors by other committees are usually rubber-stamped).

“In terms of perceptions, it is not surprising that athletes would feel more connected to their National Anti-Doping Organizations as those bodies are the ones tasked with delivering the anti-doping program directly to them whereas WADA is the global regulator and is responsible for monitoring the system,” Fitzgerald said.

When it came to athlete representation in anti-doping governance, answers largely echoed those from another survey, released last month, that focused on athletes' financial well-being and roles within the international sporting community.

In this case, 79 percent said they either strongly or somewhat agreed with the notion that athletes should have the same representation as governments and sports federations on WADA's Foundation Board. Currently, four athlete reps who are also on the IOC have spots on the 38-person board. WADA pointed out that it is undergoing reforms to strengthen the athlete voice within standing committees whose views impact the larger board's decisions.

Some of the survey's most pointed comments were directed at the relationship between the IOC and WADA. The IOC pays about half of WADA's $36 million annual budget and has half the seats on the Foundation Board.

Critics believe the relationship makes it difficult for WADA to deliver tough sanctions in cases in which the IOC might not agree. The best illustration of this came before the 2016 Olympics, when WADA recommended Russia's ouster from the games and the IOC voted to reject that proposal. The rules have since been rewritten in a way that would compel the IOC to adhere to a WADA-issued sanction, subject to appeal. Critics, however, believe that giving Russia less than the maximum punishment for tampering with the data is just another example of the IOC's hold over WADA. With many of the issues in the doping scandal still unresolved, the IOC allowed 168 Russian athletes to compete at the 2018 Winter Games, but without their flag or uniform.

WADA said that in May, two members independent of both the IOC and the world's governments, whose representatives make up the other half of the Foundation Board, will be appointed to the executive committee.

“WADA's number-one priority is in the integrity of sport and ensuring a level playing field for athletes,” Fitzgerald said.

Some athlete comments about the IOC-WADA connection:

—"The IOC has way too much influence over WADA and its decisions."

—“Because of everything that happened (with) Russia at the 2018 games. It seemed like as soon as (IOC) decided it was fine WADA just stopped caring and fighting for it which is suspicious.”

—“WADA is controlled by IOC.”