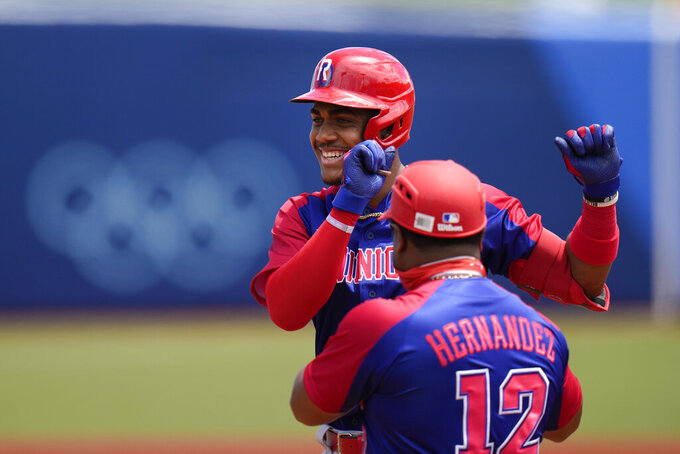 Dominican Republic's Julio Rodriguez celebrates after hitting a single against Japan during the first inning of a baseball game at the 2020 Summer Olympics, Wednesday, July 28, 2021, in Fukushima, Japan. (AP Photo/Jae C. Hong)

YOKOHAMA, Japan (AP) — If the Colorado Rockies were in the Olympics, they'd have had some shorter nights.

Olympic baseball, which started Wednesday, has some notable differences from Major League Baseball.

A biggie is the rout rule, which would have saved some innings for the Rockies. A game is over when a team is losing by at least 10 runs after seven innings. That would have cut short the Colorado's 12-2 win over Philadelphia on April 25, their 12-0 loss to San Francisco the following day and their 13-8 win over Cincinnati on May 13.

The Olympic rout rule was put in place by the World Baseball Softball Confederation for all but medal round games: The final out also has occurred if a team is ahead by 15 runs after five innings.

Olympic baseball is a throwback to the pre-analytics age. MLB Statcast isn't installed, so there is no scrunity of spin rates, exit velocity and launch angle.

“Basically, we had nothing,” American third baseman Todd Frazier said after the Americas qualifying tournament. “We had no video. We had no analytical process. It’s `Here’s your bat. Bring your own stuff.'”

Here are 10 nuggets to compare and contrast.

10. THE BALLS ARE DIFFERENT. Balls are not the major league Rawlings variety, but a WBSC version with slightly different seams. Then again, the WBSC ran out of baseballs at the Americas qualifying tournament in Florida and organizers switched mid-tournament to minor league balls.

9. FASTER IN KILOMETERS. The only metric is truly metric: Pitch speeds are listed on the Yokohama Stadium scoreboard in both miles per hour and kilometers per hour. For those wondering, Jacob deGrom's major league-leading 99.2 mph average velocity sounds even more unhittable at 159.6 kph.

8. WHO'S HERE AND WHO'S NOT. DeGrom, of course, isn't at the Olympics, which is limited to players not on 40-man major league rosters. And even then, players who technically are eligible often are blocked by their clubs. St. Louis Triple-A left-hander Matthew Liberatore pitched for the U.S. in qualifying but the Cardinals refused to let him go to Japan, fearing a few more injuries to their major league pitching staff would put him in line for a possible promotion. Rosters have a vintage feel. The U.S. team includes Edwin Jackson and David Robertson. The Dominican batting order in Wednesday's opener included Jose Bautista, Juan Francisco and Emilio Bonifacio. Japan, however, stopped its Central and Pacific League seasons for the Games and has Masahiro Tanaka on its pitching staff. Oh: And rosters are 24 players rather than 26.

7. MORE EXTRA-INNING RUNNERS. The radical rule placing a runner on second base at the start of each extra inning is even more extreme: Runners are placed on first AND second. MLB and the Major League Baseball Players Association adopted the runner on second in extra innings last year as a pandemic method of getting people out of ballparks faster, but Commissioner Rob Manfred said it likely will be dropped after this season.

6. TICK TOCK. A 20-second pitch clock is used with no runners on base, similar to the one instituted at Triple-A and Double-A in 2018.

5. WATCH THE TOUCHING. There also is a high-five limitation. No congratulations from coaches while rounding the bases. “When a batter hits a home run, members of his team shall not be allowed to touch the hitter until he has passed the home plate,” the regulations state.

4. ACCESS AND INFORMATION. Probable pitchers? Perhaps. Managers' thoughts pregame? They will not be able to meet media on game days until after games, WBSC spokesman Richard Baker said. Thoughts from stars of the game? Clubhouses are closed and while players are required to walk by media on the way out of the ballpark, they do not have to speak with reporters.

3. KEEPING THINGS MOVING. Manager and coach mound trips? Instead of one per pitcher per inning without a required pitching change, three during each game without a switch, with an additional trip for each three extra innings. There is also a limit of three stoppages for managers and coaches with batters or baserunners.

2. NO HOME-PLATE COLLISIONS. Attempting to dislodge the ball by barreling into the catcher is prohibited.

1. A NOTE TO HOUSTON ASTROS ALUMNI: “The use of electronic devices is forbidden during the games. None of the electronic devices such as cellular phones, laptops, tablets, video cameras, walkie-talkies, shall be used to communicate to on-field personnel, those in the dugout, bullpen, clubhouse and stands. The only exception to this rule is the use of phone/cellular phone to communicate between dugout and bullpen, however such device must be approved by WBSC in advance.”