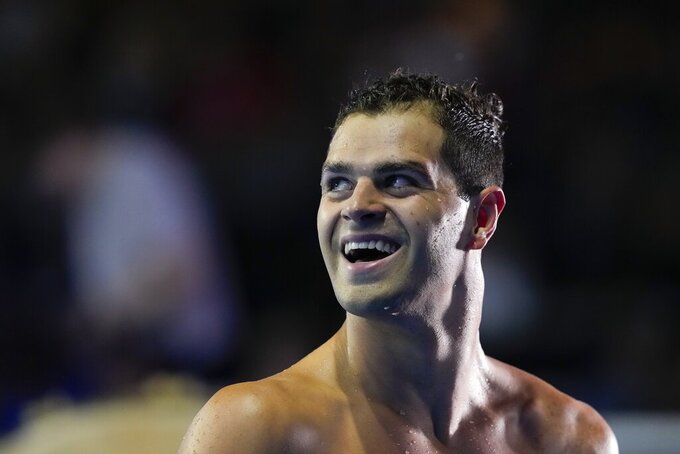 It worked out just fine for all of them. This trio of rookies is going to Tokyo.

Andrew, who was tabbed for future stardom after turning pro at 14, won the 100-meter breaststroke by one-hundredth of a second to earn his spot on Monday night.

Earlier, Huske and Curzan outdueled 2016 Olympian Kelsi Dahlia to finish 1-2 in the 100 butterfly. Huske set her second American record in as many days and her winning time of 55.66 seconds was the fastest in the world this year.

Curzan, a 16-year-old from Cary, North Carolina, admitted, “I honestly don't even know how to explain it. I was about to start crying.”

Now 22, Andrew shared his victory with his father, mother and sister.

Andrew edged Andrew Wilson in the 100 breast, touching first in 58.73 seconds. The top three finishers were separated by just seven-hundredths of a second. Andrew set an American record in the prelims and lowered it again in the semifinals.

Andrew was first coached by his father in the family's backyard pool. After a brief stint with a club team, Peter figured there was a better way for his son to train than the traditional high-yardage approach. When Andrew turned pro so young and signed an endorsement deal — ensuring he would never swim in college — the criticism flowed.

He couldn't resist reading comments about himself on social media, figuring he would use the haters as motivation.

“What happened is the more you focus on the negative, the more it starts to show up in the light when you train,” Andrew said. “I realized I had to stop doing that. The best way to fight it is to ignore it altogether.”

Andrew's father formed the Pace Race Club, based on the Ultra Short Race Pace Training concept, which focuses on pace and speed. No weight training or doing much else out of the pool. Andrew broke some of Michael Phelps' age-group records, won world junior titles and national championships. His South African-born parents moved around the U.S. in support of Andrew.

"It's always been a we effort,” Andrew said.

The pursuit nearly tore the family apart, though. Leading up to trials, he thought only his father would be in Omaha with him.

“It came to a point where our family, our team was about to separate,” Andrew said. “A lot of it was because swimming was at the center and that was our focus all around. Now we are able to be here as a family. It's a very special thing. To be able to finish a race and run to them and give them love, I feel very blessed.”

Huske draws inspiration from her mother, Ying, who was born in Guangzhou, China, and moved to the U.S. in 1991. “She's super smart,” Huske said.

Huske and Curzan are friendly rivals outside of the pool. The year-long delay caused by the coronavirus pandemic proved beneficial to both, allowing the teens to mature and build strength in their shift from age-group standouts to Olympians.

“I had a whole other year to get bigger, faster and stronger," Curzan said.

The teens are definitely getting noticed by some big names at trials. Lilly King asked Huske if she would now get a tattoo of the Olympic rings. Katie Ledecky correctly predicted the teen's winning time in the final. “That was pretty cool,” gushed Huske.

Huske is headed to Stanford in the fall. Curzan — who shares a June 30 birthday with Phelps — is a high school junior.

With barely a month to prepare for the Olympics, Huske figures she'll thrive as a first-timer.

“The more pressure there is,” she said, “I feel like the better I do.”