Five swimming events to be decided on Day 5 of Olympics 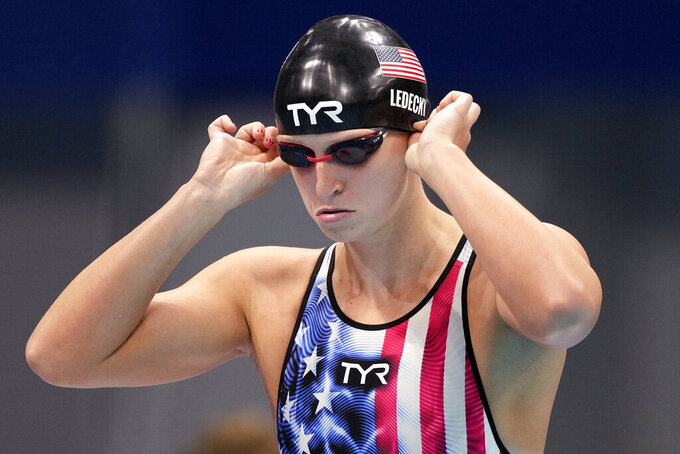 TOKYO (AP) — It will be another busy day at the Aquatics Centre with five swimming finals and the men's diving synchronized springboard final on Thursday in Day 5 of coverage of the Tokyo Olympics.

Americans play in both men’s and women’s beach volleyball, and the U.S. men's volleyball team faces Tunisia. There's a full slate of men's soccer and the men's all-around gymnastics champion will be crowned.

Katie Ledecky seeks her second gold medal of the Tokyo Games in the women's 4X200 meter freestyle relay. A five-time gold medalist entering these Olympics, Ledecky had hoped to break the all-time record of eight gold medals won by a U.S. woman.

A silver medal in the 400-meter freestyle slowed her pursuit, and then she failed to medal at all Wednesday in the 200 free. Ledecky on her third try finally got her gold, the first ever in the debut of the women’s 1,500-meter freestyle.

Michael Hixon won silver at the Rio de Janeiro Games and now teamed with and Andrew Capobianco seeks his first gold in Tokyo.

Capobianco is also entered in the men's individual 3-meter springboard later in the week. The synchronized springboard final airs live at 2 a.m. on USA Network with an encore in prime time on NBC.

Two nights after a thrilling men’s gymnastics team final that turned into a three-way duel involving Russia, Japan and China, the three superpowers will square off again in the all-around final.

The Russians edged the Japanese for gold in the team event behind 2019 world champion Nikita Nagornyy. Nagornyy and teammate Artur Dalaloyan will face off against rising Japanese star Daiki Hashimoto with individual gold on the line.

The 19-year-old Hashimoto posted the best score in qualifying. Sun Wei and Xiao Ruoteng of China also figure to be in the mix for a medal. The competition will be part of NBC's prime-time coverage.

The first medal events at the Sea Forest Waterway will be held after rowing was rescheduled a day because of bad weather.

The U.S. team of Gevvie Stone and Kristi Wagner will race in the women’s double sculls final. Stone, a three-time Olympian and 2016 silver medalist in single sculls, came out of retirement and put off finishing her medical residency for nearly three years to pursue another Olympic medal. The final will be her last race.

Two-time Olympian Anders Weiss leads the U.S. in the final of the men’s four. The events will be aired live on CNBC at 8 p.m. with additional coverage of the BMX racing quarterfinals and the fencing women’s team foil semifinals.

USA Network has a full slate of events running until 2 a.m. that includes five live events.

Both the men's and women's U.S. beach volleyball teams compete, with Kelly Claes and Sarah Sponcil facing Kenya and Phil Dalhausser and Nick Lucena up against Argentina in pool play.

The U.S. men's water polo team plays Italy, and the qualifying round of women's rugby continues live. The women's semifinal in table tennis will also be featured.

A replay of the U.S. men's basketball game against Iran will air on NBCSN.

This story has been corrected to show that Andrew Capobianco did compete at the 2016 Rio de Janeiro Olympics.