Flyers sign US Olympian Noah Cates among moves around NHL 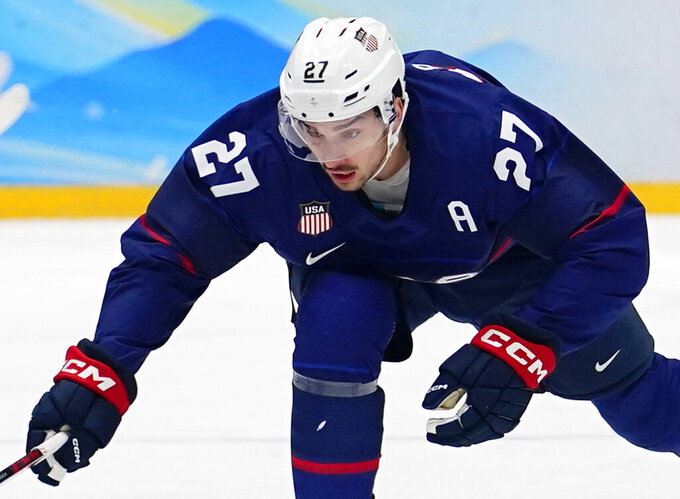 FILE - United States' Noah Cates (27) tries to stop Slovakia's Michal Kristof during a men's quarterfinal hockey game at the Winter Olympics, Feb. 16, 2022, in Beijing. The Philadelphia Flyers have signed prospect Cates and are expected to insert him into their lineup right away. (AP Photo/Matt Slocum, File)

Noah Cates is going from Beijing to Broad Street after the Philadelphia Flyers signed the forward prospect to a two-year entry-level contract.

Cates signed a deal Monday for the rest of this season and 2022-23 and is expected to play in the NHL immediately. His college season ended when Minnesota-Duluth was eliminated from the NCAA Tournament Saturday by Denver.

The Flyers drafted Cates in the fifth round in 2017. He has since recorded 99 points in 139 NCAA games and helped Minnesota-Duluth win the national title in 2019.

Cates was one of 15 college players picked to play for the U.S. at the Beijing Olympics, which the NHL skipped. He was named an alternate captain despite being just 23 and put up three points in four games.

“Noah has had an exceptional collegiate career, and we’re happy to have him signed,” general manager Chuck Fletcher said. “We have followed his progress closely and are excited to watch his continued growth in our organization.”

— The Pittsburgh Penguins signed college free agent defenseman Colin Swoyer to a $750,000 contract for next season. The Michigan Tech product will report to the American Hockey League’s Wilkes-Barre/Scranton Penguins to play the rest of this season on an amateur tryout agreement.

— The Washington Capitals also signed journeyman forward Mike Vecchione to a one-year, two-way contract for next season. It's worth $750,000 in the NHL.