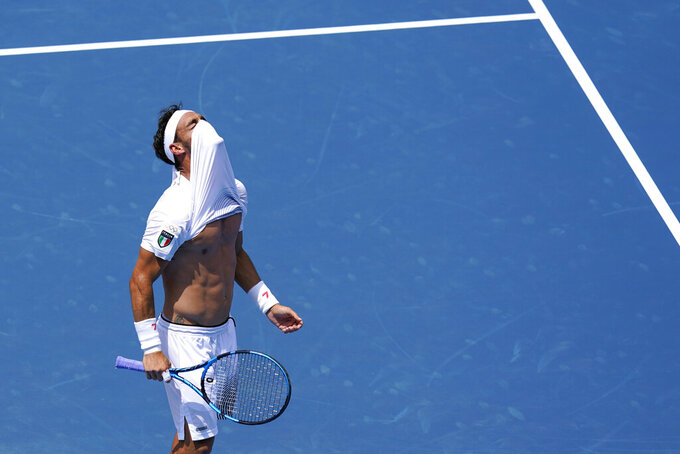 Fabio Fognini, of Italy, reacts during a third round men's tennis match against Daniil Medvedev, of the Russian Olympic Committee, at the 2020 Summer Olympics, Wednesday, July 28, 2021, in Tokyo, Japan. (AP Photo/Patrick Semansky)

TOKYO (AP) — Italian tennis player Fabio Fognini has apologized for yelling at himself with a homophobic slur during a loss in the Olympic tennis tournament.

Fognini used the offensive Italian word repeatedly during the three-set loss to Russian player Daniil Medvedev in the third round on Wednesday.

Fognini wrote in an Instagram story early Thursday that the extremely hot conditions “affected his head” and that he “used a really stupid expression toward myself."

“Obviously I didn’t want to offend anyone’s feelings,” Fognini added. “I love the LGBT community and I apologize for the nonsense that I let out.”

The Instagram story was written on a rainbow background.

Medvedev nearly fainted during the match and Fognini also struggled with the heat.

Fognini repeatedly slammed his racket during the loss, including after the final point, upon which he picked the racket up and deposited it in a court-side trash can.

The volatile Fognini was kicked out of the doubles tournament at the U.S. Open in 2017 for vulgarly insulting the chair umpire during his first-round loss in singles. He was then handed a suspended ban of two Grand Slam tournaments.