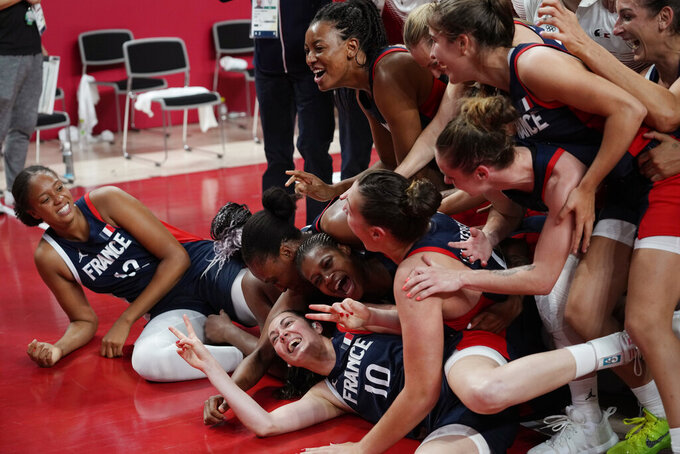 SAITAMA, Japan (AP) — Gabby Williams fell to the court, not wanting anyone to see her crying while dealing with a roller-coaster of emotions.

Taking home a bronze medal brought on the tears as she reflected on the sacrifices to get here.

Williams led seven players in double figures with 17 points, and France got some payback Saturday by beating Serbia 91-76 for the bronze medal in women’s basketball at the Olympics.

Players hugged and jumped up and down in celebration, though Williams, a star in college at UConn, bent over near midcourt by herself. Sandrine Gruda saw her, went over and pulled her up so they could enjoy the moment together. Other players grabbed French flags and continued celebrating, displaying even more national pride.

“It's the Olympics,” Williams said of the cascade of emotions that hit her at the buzzer. “I don't know how to describe it. It's the biggest stage in the world, and it's so much emotion. There's only one shot at the Tokyo Olympics. This will never happen again."

Williams was suspended for the year by her former WNBA team, the Chicago Sky because she was playing for the French national team. The Sky then traded her to the Los Angeles Sparks though she won't be able to play in the WNBA until 2022.

For Williams, that all takes a backseat to going home with a bronze medal and getting to know her mother's family in France.

“I made the right choice,” Williams said. “I did what I was supposed to do, and I couldn't be happier.”

This victory was a long time coming as France snapped a skid against Serbia that included losing both the bronze medal at the 2016 Rio Games and the EuroBasket final in June. Now France will have a medal to defend at the 2024 Paris Games.

The Serbians slumped over in disappointment, unable to hold back the tears as one player shielded a teammate by covering her head with a towel.

Yvonne Anderson, an American who obtained dual citizenship to play in the Tokyo Games, led Serbia with a game-high 24 points. Jelena Brooks added 14.

“We had one goal to get a medal, and unfortunately we're not walking with it,” Anderson said.

These teams both played Friday in the semifinals, though France had the shorter turnaround taking on Serbia only 18 hours after losing to Japan. Serbia lost to the U.S. with several starters getting a chance to rest in the second half with the Americans in control.

Serbia capped its first appearance in the Olympics in 2016 at the Rio Games by beating France to take home the bronze.

France's best finish in women's Olympic hoops was at the 2012 London Games, winning silver. The French squad was more tired of losing to Serbia with a medal or title on the line than they were by the quick turnaround from the semifinals.

The Serbians not only beat France for the EuroBasket title at the end of June, they also beat France in the 2015 EuroBasket final. France’s lone win against Serbia in recent year came in group play at the 2017 EuroBasket tournament.

There would be no repeat of those performances on Saturday.

France was in control most of the game and extended its lead to 67-56 at the end of three quarters, and it ballooned to 19 at one point. Serbia refused to just pack it in, scoring 12 straight to get within 78-71 with 3:38 left. But Duchet hit a layup with 3:14 to go, and France finished off the win.

With the bronze medal secured, the celebration began.