For the gold: It's the US and France, again, for Tokyo title 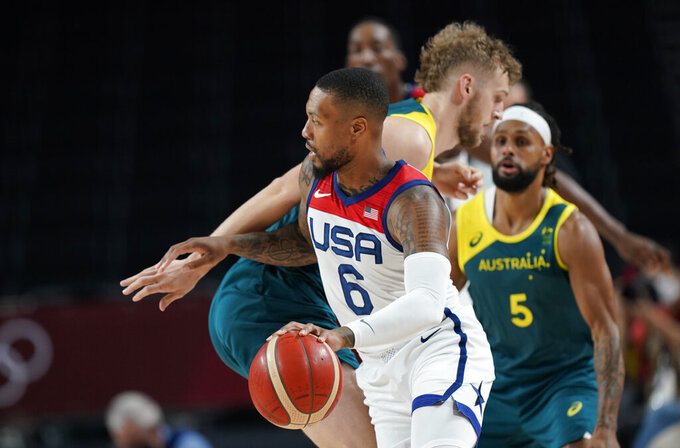 SAITAMA, Japan (AP) — For USA Basketball, some eras will end Saturday. It will be Jerry Colangelo’s last game as managing director of the men’s national team. It’ll mark the end of Gregg Popovich’s commitment as the team’s coach. Some players will likely be wearing the U.S. jersey for the final time.

The Americans just don’t want it to be atop the medal stand.

France — the new official nemesis of USA Basketball — awaits the Americans in the gold-medal game on Saturday. France has won the last two meetings between the programs, denying the U.S. a chance to play for a medal at the 2019 Basketball World Cup and then winning again in both teams’ opener at the Tokyo Olympics.

“We came here with one goal and that’s to win a gold medal,” U.S. guard Damian Lillard said. “And now we’re in a position to do it.”

It would be a fourth consecutive gold for the U.S., and if secured that would mark the longest run of American dominance at an Olympics since the program won golds in each of the first seven tournaments from 1936 through 1968. Kevin Durant can join Carmelo Anthony as the only men in U.S. history with three gold medals, and Popovich — who served his country at the United States Air Force Academy and tried to play for his country at the 1972 Olympics but wasn't selected — can only add to his lengthy list of accomplishments by winning gold.

“It’s been a tough run for us, and for us to be back is exciting,” Durant said.

Later Saturday, Luka Doncic and Slovenia will meet Patty Mills and Australia for the bronze, the winning side assured of claiming its first Olympic men's basketball medal.

The summer for the Americans started with two exhibition losses, then the loss to France in the Olympic opener, and the U.S. had to pull off double-digit comebacks — 10 against Spain, 15 against Australia — in each of their last two games just to make the final.

Yet the Americans have clearly gotten better. The French, who have Rudy Gobert and Evan Fournier among others with lengthy NBA experience on their roster, agree.

“This is not the same team we played two weeks ago,” said France’s Nicolas Batum, another of the NBA players on that roster.

The only national team that has defeated the U.S. men three consecutive times at the top level of international competition — the Olympics or what is now called the World Cup, formerly the world championships — was the Soviet Union. They garnered the still-debated gold-medal win at the 1972 Olympics and then topped the Americans at worlds in 1974 and 1978.

France is one win from matching that feat.

“I think, I hope, that we will be ready Saturday,” France coach Vincent Collet said. “We know Team USA is the favorite of this final. They have been (the) favorite for the last couple games. But I hope when we play against them we sustain our fire, we sustain our energy, even if we know they are favored.”

That doesn’t seem like it’ll be a problem for the French. After France survived the semifinals against Slovenia with a 90-89 win — secured when Batum blocked a layup try with 2.4 seconds remaining — Timothe Luwawu-Cabarrot was asked his thoughts on playing the U.S. for gold.

“I think it will represent something pretty special,” Luwawu-Cabarrot said, “because it’s the first one we’re going to win.”

That isn’t a level of confidence often heard before teams play the U.S., at least not in this era of sending NBA players to the Olympics. But the French have reason for that swagger right now, given the win in China then rallying to beat the Americans in the group-play opener. They believe they can win, despite being listed as double-digit underdogs.

“We all knew from the beginning what they were capable of and we know how they’ve stepped up every time during the tournament,” France’s Nando de Colo said. “We did a good game the first time, and we’ve got a lot of respect for their team. But we will play this final with a lot of confidence, and the most important thing is to stay focused on what we do as a team.”

This game marks only the second time that the U.S. will have gotten a rematch in the same Olympics against a team that defeated the Americans earlier in the tournament. The other instance came in 2004, when the U.S. lost to Lithuania in group play before winning the rematch in the bronze-medal game.

That was the tournament where the Americans realized everything had to change. Colangelo was brought in to rebuild the program, Mike Krzyzewski was hired to coach what became the first three Olympic runs and then the baton was passed to Popovich.

Colangelo has talked many times about how he’d like nothing more than to end his tenure with another gold.

France is assured of, at worst, matching its best Olympic performance; it got silvers after losing gold-medal games to the U.S. in 1948 and 2000.

The Americans — looking for a 16th gold medal in 19 Olympic appearances — don’t have that luxury. For them, only one outcome will be good enough.