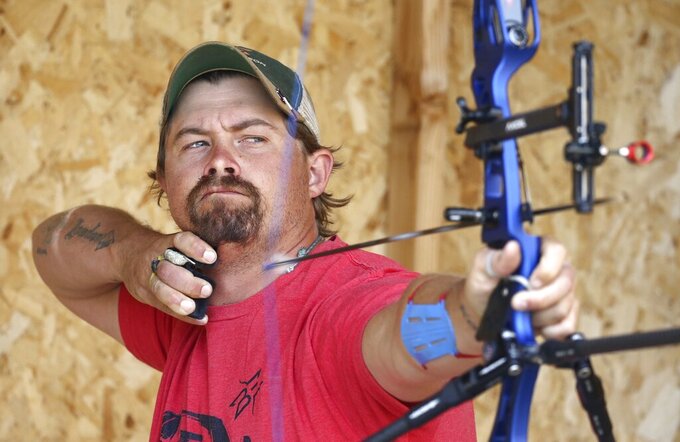 FILE - U.S. Olympic Team archer Brady Ellison lets an arrow fly as he practices on his range in Miami, Ariz., in this Thursday, April 30, 2020, file photo. Ellison is the top-ranked archer in the the world and the favorite at the Tokyo Games. A few years ago, he wasn't sure if he would even shoot another arrow again. (AP Photo/Ross D. Franklin, File)

TOKYO (AP) — When the nerve pain in his arm from shooting arrows became too much to handle, and when a positive doping test threatened to end his career, Brady Ellison started thinking about his next chapter.

The Olympic archer grabbed applications at McDonald's, and Walmart — also at a local copper mine.

“If I got a ban and my income went to zero, I didn’t care where I worked,” Ellison said.

But the shooting pain radiating from his fingertips healed and the doping case was dismissed. Thanks to that, Ellison is ranked No. 1 in the world and has golden medals, not the world-recognized golden arches of McDonald's, in his sights at the Tokyo Olympics.

“It’s terrifying,” said the 32-year-old Ellison, who was second in the qualifying round Friday with a score of 682, six behind the top mark posted by Kim Je Deok of South Korea. “I was looking for jobs and talking to Toja (his wife) about what is our life going to look like when I can’t compete for four years?”

The fact he’s even shooting arrows pain-free again was something of a medical marvel. He didn't think that day would arrive after his success at the 2016 Rio de Janeiro Games, where he earned silver in the team competition, bronze in the individual event and a whole lot of social media buzz his resemblance to Hollywood actor Leonardo DiCaprio.

Soon after, Ellison began experiencing pain in one of his fingers. From there, it flared throughout his arm, “like bolts of lighting,” he said. That discomfort lingered into 2017 and '18.

He saw doctors. He underwent tests. No one could figure out the cause, which only increased his frustration to the point where he was beginning to look for other ways to pay the bills. He was close to applying for a position at a copper mine in Globe, Arizona, and near where he lives.

His wife, Slovenian archer Toja Ellison, knew of a natural healer in her country who specialized in helping those with thyroid conditions, which Ellison has dealt with and for which he takes medication.

So he traveled there in the fall of 2018. The healer put his hands on Ellison’s arm/hand and he felt almost instant relief — to the point where three days later he fired more arrows in a day than he had in three years.

His only issues now are blisters from shooting too many arrows.

“We can deal with that,” he cracked.

Healthy again, he turned in a memorable season in 2019, winning a world title and returning to the No. 1 spot in the world rankings.

Throughout the pandemic that postponed the 2020 Tokyo Games, he trained at a range he built with a tractor.

He remained in a groove and on track toward Olympic gold.

Then, the notification arrived: An out-of-competition urine sample he provided in October came back positive hydrochlorothiazide (HCTZ), a prohibitive substance in the class of diuretics and masking agents. He immediately contacted an attorney and pledged to take a lie detector test to prove his innocence.

As a backup plan, he picked up job applications.

“I’ve worked very hard my whole entire career to be super-smart with my money. We own everything that we have,” Ellison explained. "If all of a sudden we’re at ground-zero dollars a month, it gives us enough time to where I can go work at Walmart, McDonald’s and still pay our bills. It would extremely tight, but we could still live off that.”

It was determined there was contamination in his thyroid medication consistent with the level of his positive test. He accepted a finding of no-fault from the U.S. Anti-Doping Agency and didn’t face a period of ineligibility.

These days, he sometimes has a little company when he trains. His 8-month-old son, Ty Cooper, will sit in his stroller and stare at his four-time Olympian father hitting target after target.

Looming target: Remain on the Olympic scene long enough so that he and his son could form Team Ellison to represent Team USA.

“That would be insane,” said Ellison, who envisions, health willing, making 10 maybe 11 Olympic squads. "That's if he even wants to shoot a bow. We’ll let him make that decision.”

With the Tokyo Games not allowing fans or family, his wife and young son went to stay in Slovenia in May. That way, he could practice at the Chula Vista Elite Athlete Training Center in California and they could be with her family. He saw them briefly at a World Cup in Switzerland and again in France.

But it will be more than a month until he sees them again (Ty just got his first two teeth), maybe with a gold medal — or three — around his neck. He’s competing in the individual and team events (he also helped the 2012 U.S. squad to silver), along with possibly the newest Olympic archery competition, the mixed team competition.

“Of course I want to win three gold medals in Tokyo,” said Ellison, whose story is chronicled in a recently released documentary — “Believe: Brady Ellison” — through World Archery. ”But that’s not going to define my career anymore. I feel like being a father and stuff like that defines more of who I am than any amount of gold medals."