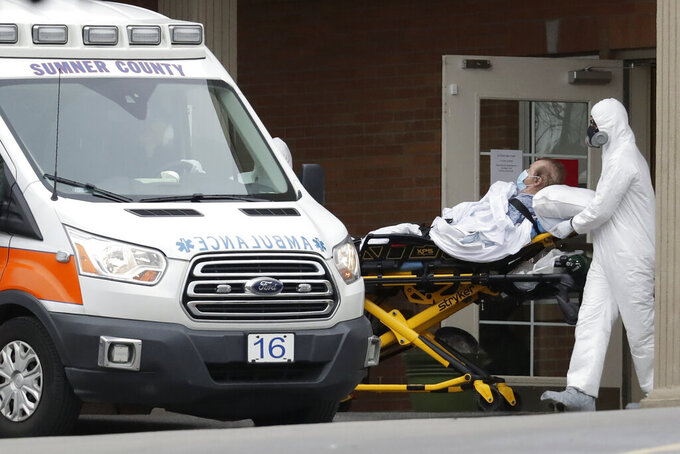 A resident is removed from the Gallatin Center for Rehabilitation and Healing, Monday, March 30, 2020, in Gallatin, Tenn. Multiple people tested positive for the coronavirus at the facility Friday. Tennessee Gov. Bill Lee issued a statewide "safer-at-home" order on Monday to help stem the state's rapid spread of coronavirus, mandating the closure of all nonessential businesses while urging residents to remain at home whenever possible for the next two weeks. (AP Photo/Mark Humphrey)

Lee, a Republican, said that a recent uptick in “movement around the state” forced him to order individuals to avoid all non-essential travel until April 14 because of the global pandemic.

Previously, the first-term governor had only “strongly urged” people to stay home, saying he was stopping short of a statewide mandate to “protect personal liberties.”

“I have updated my previous executive order to clearly require that Tennesseans stay at home unless they are carrying out essential activities,” Lee said in a statement.

Lee said his administration analyzed traffic patterns and used cellphone mobility data to determine that more people were traveling across the state at “pre-COVID-19 levels.”

Lee received thousands of pleas from doctors and other medical professionals to issue the order, one of them being former U.S. Senate Majority Leader Bill Frist.

However, Lee's newest order does not include a strong enforcement mechanism. Instead, Lee said during a media briefing Thursday that it'll be up to individual law enforcement agencies to decide how to implement the order.

“We’ll watch this and take appropriate steps necessary for enforcement as we see them," Lee said.

In Cookeville, the CEO of a nursing home confirmed Thursday that 28 patients and 16 employees have tested positive for the coronavirus, The Tennessean reported. Most of the people who tested positive didn't have any symptoms.

Around the state, the number of jobless Tennesseans continued to swell as more companies lay off workers. New unemployment claims climbed to about 94,500 last week, the state Department of Labor and Workforce Development reported Thursday.

The number of claims more than doubles the 39,100 new unemployment claims from the previous week.

Three weeks ago — before cities and counties began issuing orders closing non-essential businesses — only 2,700 unemployment claims were filed in Tennessee.

The large bump in claims caused the state’s jobs website to experience problems from a 2,000% increase in usage. Technicians added capacity to the site to improve responsiveness, officials said.

Tennessee’s health department has reported more than 2,800 cases of the coronavirus and at least 32 deaths. Shelby County, which includes Memphis, has seen 638 cases and seven deaths.

As more people get sick, the U.S. Army Corps of Engineers has found some locations to convert to medical care facilities to ease the burden on hospitals.

Some of those will be the Music City Center in Nashville, the Gateway Shopping Center in Memphis, the Chattanooga Convention Center and the Knoxville Expo Center, the governor said.

The search for more medical sites comes as hospitals anticipating a patient surge seek out more supplies, including masks, ventilators and beds.

A logistics group is working to find face masks for doctors and nurses. And testing capacity is increasing, Jain said.

“It's always an uphill battle doing the task that's ahead of us of such magnitude,” Jain said by phone.

In most people, the new coronavirus causes mild or moderate symptoms that clear up in two to three weeks. For some, especially older adults and people with existing health problems, it can cause more severe illness and may be life-threatening.