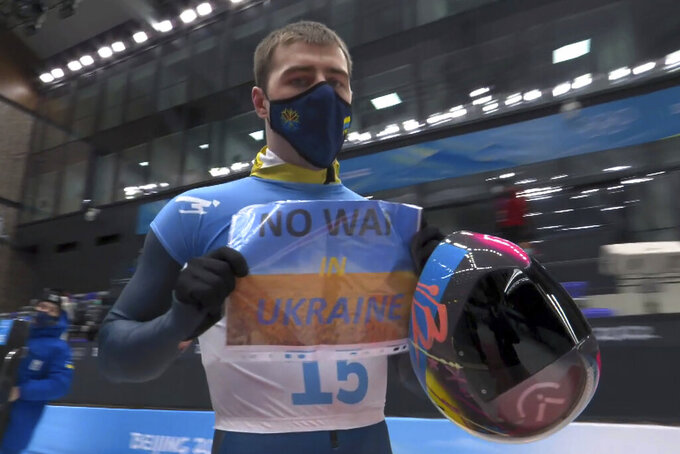 In this frame from video, Vladyslav Heraskevych, of Ukraine, holds a sign that reads "No War in Ukraine" after finishing a run at the men's skeleton competition at the 2022 Winter Olympics, Friday, Feb. 11, 2022, in the Yanqing district of Beijing. (NBC via AP) 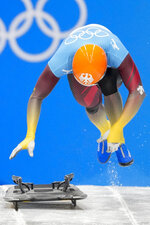 BEIJING (AP) — Germany has its first Olympic skeleton champion, and the country is simply sliding away from all challengers so far at the Beijing Olympics.

This, however, was: China has its first Olympic sliding medal — ever.

Christopher Grotheer was a runaway winner in the men’s skeleton event that ended Friday night, the first German to win gold in the discipline where sliders navigate the icy chute headfirst at speeds that can exceed 80 mph.

There have been five gold medals handed out so far in sliding events at these Beijing Games — all five of them won by Germans. Germany went 4-for-4 in luge events to open the sliding competitions in Beijing, and now has eight medals through five events at the Yanqing Sliding Center.

The rest of the world, combined, has seven.

The German sliding medal haul is only going to keep growing. German racers are second and third at the midpoint of the women’s skeleton event that will end Saturday night, and the world’s most dominant sliding nation will have contenders in all four of the bobsled events as well — including heavily favored Francesco Friedrich in the two- and four-man bobsled competitions.

But for the Chinese, Yan's bronze was like gold. A country that is relatively new to the sliding world invested tons of time and money into contending at these games, and nearly came away with two medals Friday night. Yin Zheng was fifth for the host nation.

A Ukrainian skeleton athlete ended his third run by revealing a small sign to the cameras urging peace in his homeland. The message from Vladyslav Heraskevych read: “No War in Ukraine.” The sign was printed on a blue-and-yellow piece of paper, matching the colors of Ukraine’s flag.

Defending Olympic champion Yun Sungbin of Korea was 12th in what could well be his final race, after saying this week that he hasn’t had the same passion for sliding.

Andrew Blaser, the only U.S. slider in the race, was 21st and didn’t qualify for the fourth run. Only the top 20 in the field advanced to the final heat, so Blaser’s first Olympic appearance ended one slide earlier than he wanted.

“There’s a lot of emotions that happen at the end of a race,” Blaser said. “Unfortunately, not getting a fourth run ... they’re experiences that I’ve had, but I don’t think there’s anything that really preps you for that feeling. It feels like a weight just kind of drops on you.”

Blaser hasn’t made a final decision about whether he’ll continue sliding, at least for a full four-year period through the 2026 Olympics. He said he’ll likely decide by May.

“It’s not how you race once you’re here,” Blaser said. “For some people, it is. For me, it wasn’t. It was everything that turned me into the athlete, the coach, the slider that I am today and I have to remember that those things are still there regardless of the outcome.”

Midway through Blaser’s interview session, Spanish slider Ander Mirambell — who was 24th in the 25-man field — walked past the American and gave him a big smile along with some congratulatory slaps on the shoulder.

“Superstar. The first time I started sliding with him, and I told him one day you’ll be in the Olympic Games,” Mirambell said as he turned toward Blaser. “And now you are here. Amazing.”

With that, Blaser broke into a smile.

“It’s cool to see and to get those memories,” Blaser said.

Grotheer’s lead was 0.70 seconds entering Friday night; it grew to 0.85 seconds after the third run, with Jungk losing a bit more time with a hard slam into a wall near the finish line.

At that point, the only thing that could stop Grotheer from winning the gold medal was a massive mistake.

Didn't happen. He was perfect. And with that, Germany's perfect sliding record at these Olympics remained intact.