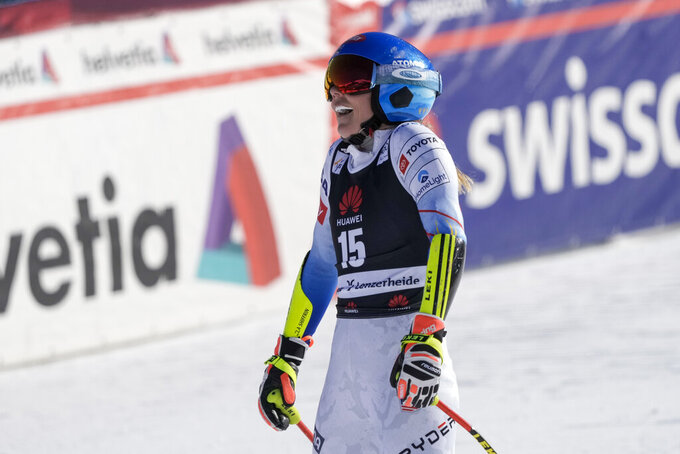 That approach paid off Saturday as Shiffrin took a clear lead in the World Cup overall standings by placing second in a tricky super-G won by the unheralded Romane Miradoli.

It was an impressive return to form on a steep, twisting course for the American star in her first race after poor results at the Winter Olympics, taking home no medals from six events.

“After the last couple of weeks I really appreciate this,” said Shiffrin, who was congratulated course-side by tennis great Roger Federer, who has a home close to the Lenzerheide course.

Shiffrin and Petra Vlhova, the defending overall champion, started the race tied on points after 29 World Cup events this season and eight left this month.

Vlhova finished 18th, a massive 3.31 seconds back, skiing immediately before Shiffrin, who took advantage with a clean run to be just 0.38 behind the French leader.

Vlhova dropped 67 points in the overall standings behind Shiffrin, who is a three-time overall champion. Their duel will resume Sunday in a giant slalom.

“This is really great today, that’s a positive thing of course, but I don’t want to get ahead of myself," Shiffrin cautioned. "I finally just enjoyed skiing for a day”

“I think I’ve been actually pretty awful to be around with my team," she said. “The last weeks, not because of the Olympics but of course that’s a big part of it, it’s just been heavy. Everything felt really, really heavy on my mind and on my heart.”

Five of the first 10 top-ranked starters failed to complete the course on a bright, cold day and Miradoli, in the No. 8 bib, found a near-perfect fast line.

Lara Gut-Behrami, the new Olympic champion in super-G, was third, trailing 0.88 back of Miradoli who got her first career podium finish.

“That’s a crazy day. It’s like a present for all the work I did before," Miradoli, who turns 28 next week. Until Saturday she had a best result of fifth in more than 120 previous World Cup starts, and not since more than three years ago.

Another winner Saturday was Federica Brignone who sealed the season-long super-G title despite finishing more than two seconds back in ninth place.

Brignone, the 2020 overall champion, earned enough points to extend her lead to more than 100 points in the discipline standings over Elena Curtoni, her Italian teammate. Curtoni skied out as one of the early starters.

The final super-G of the season is on March 17 at Courchevel, France, during the World Cup finals meeting.

“I can be at the finals and be free and enjoy my race," said Brignone, who also chatted with Federer after her race.

Shiffrin said the racers only knew from watching television near the start hut that Federer was at the bottom of the hill waiting for them.

“Everybody was like, ‘Oh my gosh, we have to ski really fast!’” she said. “It’s pretty surreal to see that he’s here watching a ski race and quite exciting for us.”