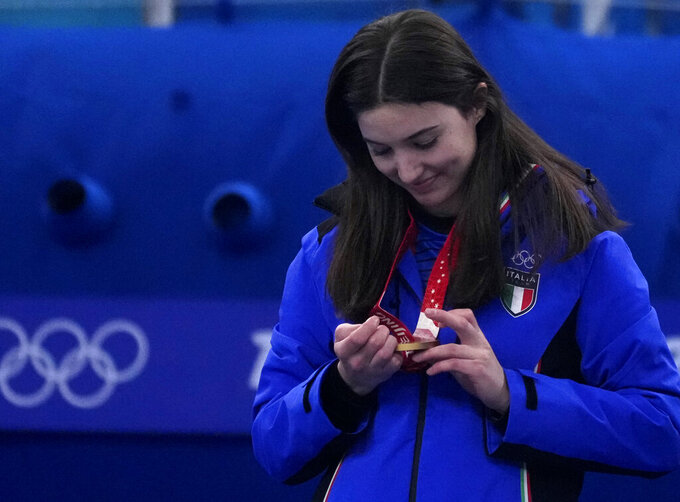 Italy's Stefania Constantini, looks at her gold medal, during the awards ceremony for the mixed doubles curling match against Norway, in the curling venue, at the 2022 Winter Olympics, Tuesday, Feb. 8, 2022, in Beijing. (AP Photo/Nariman El-Mofty)

Put him on the top step of the Olympic medals podium, and he is an even more imposing figure in the sport.

Mosaner and Stefania Constantini won the mixed doubles gold medal match on Tuesday, capping a nearly perfect week with an 8-5 victory over Norway. It was the first-ever Olympic curling medal for Italy, which romped through the round-robin with a perfect record and advanced to the final by beating Sweden 8-1.

"In Italy, curling is not very known," Constantini said. “During this week, lots of fans have been following, and they have been interested in this sport, so it’s important for Italian curling.”

Kristin Skaslien and Magnus Nedregotten will take a silver medal back to Norway four years after claiming bronze at the Pyeongchang Games.

Sweden beat Britain 9-3 earlier Tuesday for the bronze medal in a matchup of longtime curling powerhouses. Norway is also a regular on the Olympic podium, earning five medals in the seven Winter Games since the sport returned to the program in 1998.

And then there’s Italy.

The Southern European nation had no tradition to speak of in the sport they referred to as “bocce on ice” before being granted an obligatory spot in the 2006 Turin Olympics as the host. Even now, Italian officials say, there are only three curling clubs and about 400 participants in the entire country.

“It's a niche sport. You don't have to forget that Italy has soccer and then all the other sports that are more important,” coach Claudio Pescia said. “It will remain a niche sport. So it's our job now to take this momentum ... to take advantage."

They have a good start: With the 22-year-old Constantini and her 26-year-old partner, the Italians have a likely medal favorite when they host the next Winter Games in Milan-Cortina. (A delegation from the ‎2026 host cities was at the Ice Cube on Tuesday, standing to cheer when Constantini completed a double takeout with her final stone to seal the victory.)

“An Olympics at home, it happens just one time in life. So it will be really special to play there,” said Constantini, who is from Cortina. “And also, after what we have done today.”

The Norwegians were the reigning bronze medalists — but with an asterisk. They lost in the third-place game in Pyeongchang but moved onto the medal stand when Russian clurler Alexander Krushelnitsky failed a doping test.

So the victory over Britain in the semifinals on Monday ended a two-game Olympic playoff losing streak. And when the Norwegians stole two points in the first end of the final, they put the dominant Italians in an unfamiliar position.

But Italy came back to take two points in the second end, stole one in the third even without the last-rock advantage, and then opened a 6-2 lead at the halftime break when Skaslien’s final throw failed to clear a trio of red Italian stones out of the target area.

Norway could manage only one point in the fifth and Italy matched it in the sixth before the Norwegians scored two in the seventh end to make it 7-5. But in the final end, Italy held the last-rock advantage known as the hammer.

Mosaner made a rare mistake with his first throw, missing everything. Norway was lying two when Skaslien knocked out Italy’s red rock with her last throw.

But Constantini easily knocked both yellow stones out with the hammer. Mosaner raised his hands in celebration, then the teams fist-bumped — a pandemic-inspired substitute for the traditional post-game handshake.

“Winning a gold medal without losing a game, I think, is amazing,” said Mosaner, who was on the men’s team that finished ninth in Pyeongchang and will also compete in the traditional, four-person discipline that begins on Wednesday.

“With the men’s team, I think maybe we are not the best team for the medal. But with mixed doubles, it was the same,” he said. “And, we can win maybe all the games but also lose all the games. We just need to play good starting and then we see what happens.”

The Swedish team of Almida de Val and Oskar Eriksson easily beat Britain one day after lasting only seven ends against Italy.

Jennifer Dodds of Britain made an easy draw to collect two points in the sixth end, then partner Bruce Mouat immediately bumped fists with the Swedes to concede the match with two ends to play.

It is the fifth straight time Sweden has reached the Olympic curling podium, including a gold in women’s and a silver in men’s four years ago in Pyeongchang.