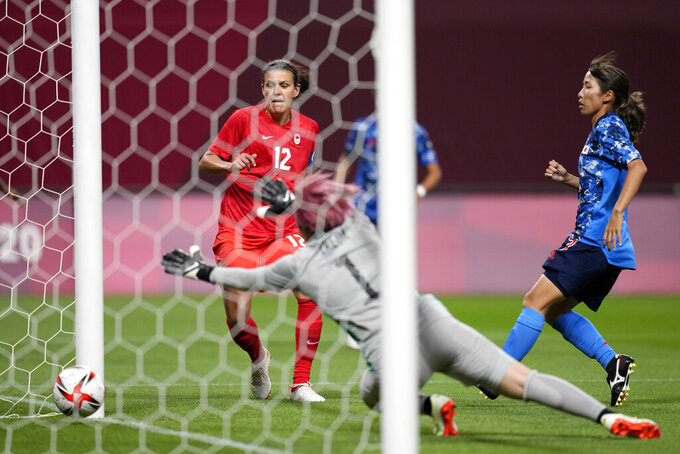 SAPPORO, Japan (AP) — Mana Iwabuchi scored in the 84th minute and Japan pulled into a 1-1 draw with Canada to open the Olympic women's soccer tournament on Wednesday.

Christine Sinclair, the all-time leading international scorer among men and women, scored her 187th career goal in the sixth minute to give the Canadians the early lead. It came in her 300th appearance with the team.

Iwabuchi answered late with a long strike that caught Canada goalkeeper Stephanie Labbe out of position.

The Tokyo Games are Canada's fourth Olympics. The team has won bronze medals in the last two.

Sinclair has played in all four appearances, scoring 12 goals in 15 games — including the game-winner against Brazil in the third-place match in 2016.

The Canadians are playing under coach Bev Priestman, who took over when Kenneth Heiner-Moller stepped down last June.

Japan, which qualified as hosts, did not make the field for Rio de Janeiro in 2016. Known as the Nadeshiko, Japan won silver at the 2012 London Games.