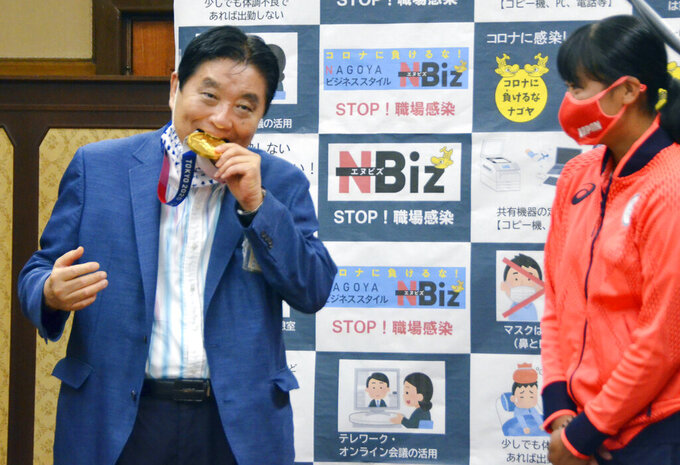 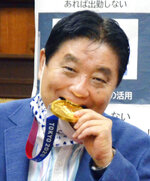 TOKYO (AP) — A Japanese mayor apologized Thursday for biting the Olympic gold medal of a softball player who had paid a courtesy visit after Japan beat the United States in the final.

Nagoya mayor Takashi Kawamura had praised pitcher Miu Goto during the Aug. 4 visit, but his eyes were glued to her medal. He asked her to put it around his neck. Kawamura then pulled down his face mask and bit into it.

“I’m really sorry that I hurt the treasure of the gold medalist,” Kawamura told reporters Thursday.

The mayor said the medal was undamaged, though he offered to pay for the cost of a new one.

Goto, however, has accepted the International Olympic Committee's offer of a replacement, according to Japanese media reports.

The medal bite has become a staple of Olympic photo-ops — but for the winners themselves, not others.

The scene broadcast on television prompted thousands of complaints to city hall. Some Olympians said they treat their medals as treasures and that it was outrageous for Kawamura to bite one.

“I would cry if that happened to me,” Naohisa Takato, who won gold for Japan in judo, said in a tweet. “I handle my own gold medal so gently not to scratch it.”

Yuki Ota, a silver-medal winning fencer, said the mayor's action was disrespectful to athletes and was a bad idea for COVID-19 measures.

Goto reportedly considered keeping the original but eventually accepted the IOC offer of a replacement.