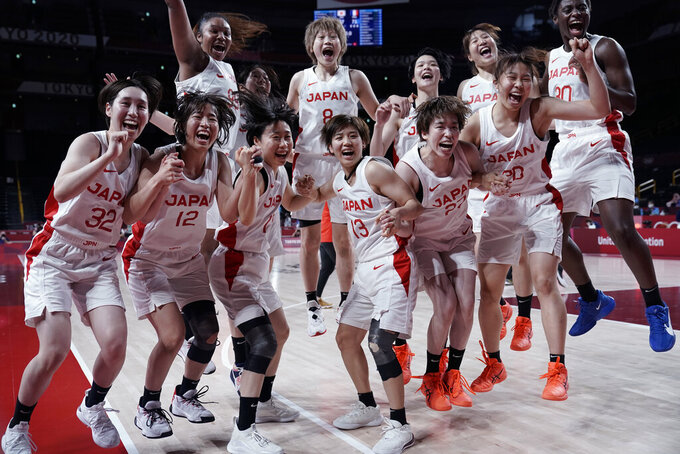 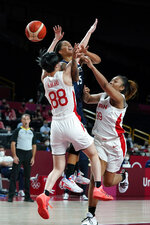 SAITAMA, Japan (AP) — Japan will play for gold in the women’s basketball tournament at the Tokyo Games for the first time ever.

Just as coach Tom Hovasse predicted when he was hired in 2017.

Japan will play the United States, a 79-59 winner over Serbia, also as Hovasse forecast back in 2017. He said beating the Americans will take the best game the Japanese have ever played.

“We need to be cooking on all cylinders from the jump to the end of the game,” Hovasse said. “We have a shooters chance. We definitely have a chance. They are contrasting styles. Can we stop them inside? No. Can they guard us from outside for 40 minutes? We’ll see.”

This victory continues an amazing run for the host nation, which came into the Tokyo Games ranked 10th in the world. Even with no fans allowed due to the coronavirus pandemic, volunteers and other supporters found their way into the stands at the Saitama Super Arena to witness this historic moment.

The fans stood and started applauding in the final seconds, though the players' celebration was more muted than after their victory in the quarterfinals. Players hugged before huddling on the logo at midcourt, where they danced before turning and bowing and applauding their supporters. They then posed for photographers at their end of the court.

Hovasse said his players believe they can win and they're improving with each game.

“Everyone is clicking right now,” Hovasse said. “We’re just confident. We’re not overconfident at all. We’re not nervous. I didn’t see nervousness at all.”

Just reaching the semifinals was a first for Japan, which is playing in the country's fifth Olympics. Hovasse, the first foreign-born coach and a native of Durango, Colorado, was hired as head coach in 2017 after being an assistant with the team that finished eighth at the 2016 Rio Games.

This semifinal was a rematch of the Olympic opener for both teams that Japan won 74-70.

This one was not that close as Japan took control in the second quarter once the 3-pointers started falling. Japan finished 11-of-22 from 3-point range. When France tried to defend the long shots, the Japanese players continued to make cuts to the basket and running past French defenders.

“We let them play their game with the 3 points,” France forward Endene Miyem said. “We knew about it but still we couldn’t stop it.”

Japan improved to 6-1 all-time against France, including 3-0 in the Olympics. Japan’s only loss to France came at the 1994 world championships in the semifinals.

Yuki Miyazawa had 14 points for Japan, which had 10 players score against France. Rui Machida came into the game leading the tournament averaging 12.8 assists; she set the Olympic record with 18.

France, the 2012 silver medalist, will play Serbia for bronze on Saturday. Coach Valerie Garnier said now her team must focus on a game with only 17 hours to recover and refocus before tipoff. She wants all frustration funneled into that game with bronze on the line.

“Of course, we're going to give it our all because that's the goal,” Garnier said, “to end this competition with an Olympic medal.”

The teams took turns driving to the basket early in the game for layups, and France led 22-14 after the first quarter. Japan, which missed five of six 3-pointers to start the game, made 5 of 6 from beyond the arc in the second — outscoring France 27-12 for a 41-34 halftime lead.

Now Hovasse and Japan get what they wanted, a shot at the U.S. for the title.