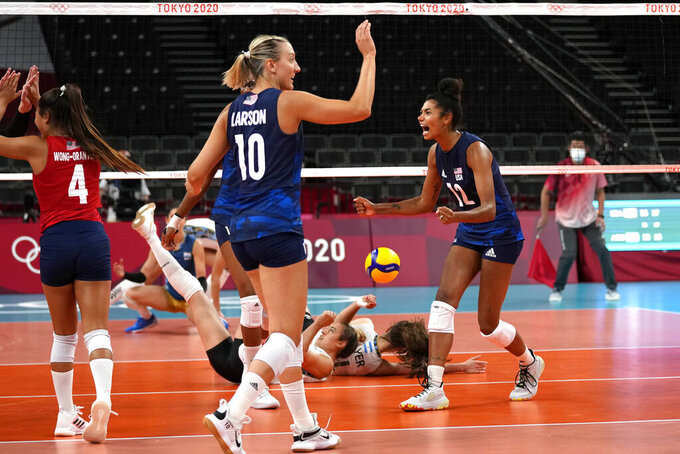 TOKYO (AP) — Jordan Thompson skied high above the net and sent an emphatic spike to end the match.

That provided the perfect punctuation to an impressive Olympic volleyball debut for the U.S. team's star opposite hitter.

The 6-foot-4 Thompson posted a game-high 20 points, including 18 on the attack at the net as she set the tone up front for an American team seeking its first gold medal in the sport.

“There were a little bit of nerves in the first set but we started to get in a groove in the second set,” Thompson said. “We played with a lot of energy but calm energy and I think it went pretty well.”

Thompson and another Olympic newcomer, setter Jordyn Poulter, had excellent chemistry in their debut matches. Poulter had a game-high 37 sets as she frequently got the ball to Thompson in the proper spots to lead to points for the U.S.

Getting that confidence in the opening match was crucial for the newcomers because the competition gets significantly tougher the next time the Americans take the court on Tuesday against defending champion China.

“I think it’s really nice because the storm will only get tougher once we get China next and lots of great teams in our pool," Kiraly said. ”I think it’s nice to get off on a solid foot. (They) were able to find a good connection on a variety of sets. They've been working hard on that. We'll face a much better team against China so it will be helpful to have those connections going."

Thompson comes from an athletic family. Her father, Tyrone Doleman, played professional basketball in Europe and also spent time with the Harlem Globetrotters. Her uncle, Chris Doleman, was one of the NFL’s fiercest pass rushers and made the Hall of Fame in 2012.

Thompson tried out basketball but opted instead for volleyball once she got to eighth grade because she didn’t like the contact but said the basketball drills she did as a kid with her father helped build her hand-eye coordination and other skills that helped her thrive in her new sport.

“My dad, he was really supportive,” Thompson said. “He just wanted me to play a sport. My parents were supportive of my decision to play volleyball and continue with that. They're pretty happy with how it ended up.”

The only real hiccups in the match for the Americans were several delays in the opening set caused by problems at the scorer's table that left Kiraly bewildered at times.

But it did little to slow down his team.

“It's a little frustrating to how many minutes long delays over software or operator issues," he said. "All of us would hope those kinks have been worked out by then. So be it. The thing I like best is each time we came out of one of those unusual long delays, our team was ready to go right off the bat.”

The U.S. also was forced to play without assistant coach Erin Virtue, who was quarantined because she had been in “close contact” with someone who tested positive for COVID-19. Virtue has not tested positive and could be back for the next match.

China got off to a slow start for the second straight Olympics, losing to Turkey 25-21, 25-14, 25-14 in another Pool B match. The Chinese lost their opening match and two others in pool play in 2016 before rallying to win the gold.

The victory was a breakthrough for Turkey, which qualified in women's volleyball for only the second time after being eliminated in pool play in 2012.

“China didn't play their best game for sure but we played our best game. I can say that,” Turkey captain Eda Erdem Dundar said. “Everybody is happy right now.”