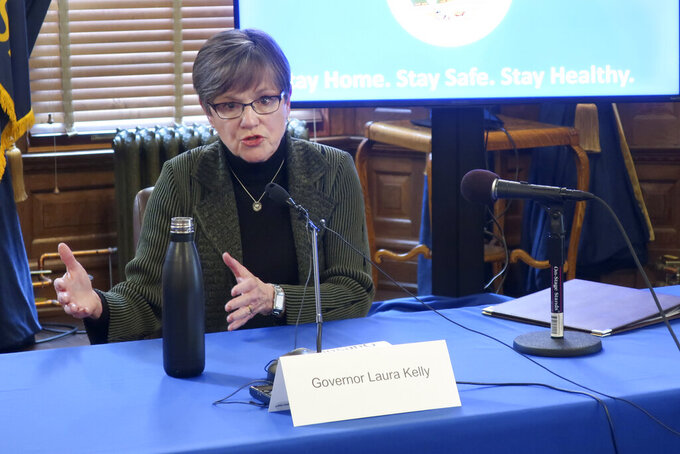 Kansas Gov. Laura Kelly answers questions about the coronavirus outbreak in her state during a news conference, Wednesday, April 1, 2020, at the Statehouse in Topeka, Kan. Kelly says the state is in the "exploratory phase" of determining what to do about containing the virus in its prison system. (AP Photo/John Hanna)

The Democratic governor said Kansas has sought “hundreds of thousands of everything,” including masks, gloves, gowns and testing kits, to deal with the outbreak of the virus that causes COVID-19. The state also has been overwhelmed by questions and claims from jobless workers seeking unemployment benefits.

Kelly expressed her frustrations with President Donald Trump's administration as the number of confirmed coronavirus cases rose nearly 15% in a single day, to 552, with 13 deaths since early March.

Asked about requested supplies, Kelly said, “The shipments have just not come in,” and that she and other governors “haven’t really gotten a good answer” as to why. Her remarks were her most pointed to date, coming after her stay-at-home order took effect Monday in a GOP-leaning state that Trump carried by nearly 21 percentage points in 2016.

“They didn’t have the stockpiles on hand to meet the demand when the demands came, and then, quite honestly, whatever system they have for delivery isn’t working,” Kelly said during a daily briefing. “I think, honestly, they just were not prepared.”

Trump said Wednesday that his administration was waging “all-out war to defeat the virus" and is backing up governors.

“And there’s never been a backup like we’ve given them,” he said.

“And I think we’re all paying the price for that now,” Kelly said.

For most people, the new virus causes mild or moderate symptoms, such as fever and cough that clear up in two to three weeks. For some, especially older adults and people with existing health problems, it can cause more severe illness, including pneumonia, and death.

One of Kansas' COVID-related deaths was a 90-year-old resident of the Life Care Center of Burlington. Twenty-five other residents and staff members at the facility about 60 miles (95 kilometers) south of Topeka are sickened, Coffey County officials said.

The same company runs a nursing home near Seattle tied to 40 deaths and one in Kansas City, Kansas, where a resident died last month. The Burlington nursing home hasn’t responded to telephone messages seeking comment.

The state is using Amazon Web Services, re-activating retired employees, rehiring workers previously laid off and bringing in workers from other parts of the Kansas Department of Labor, upping the number of workers from 21 to 70 eventually.

Kelly acknowledged that people are having trouble filing their claims because of the volume. “For that, I’m sorry,” she said.