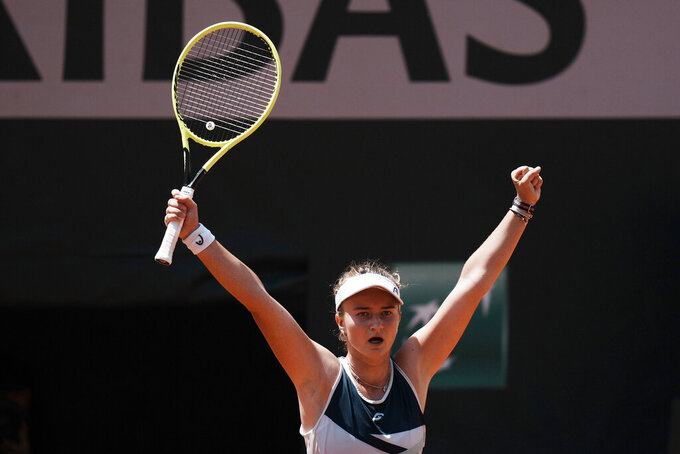 Djokovic converted his third match point and then let out a huge roar. Then he turned to his box and roared again.

The match was suspended in the fourth set for about 20 minutes after a pandemic-related curfew set at 11 p.m. met with some resistance and fans had to be ushered out.

Only Roger Federer has more major semifinal appearances in men’s tennis history with 46. Djokovic’s 11th semifinal at Roland Garros is second behind only defending champion Rafael Nadal’s tally of 14.

The semifinal between Djokovic and Nadal on Friday will be the pair’s 58th meeting in their dazzling careers.

Djokovic is an 18-time Grand Slam champion who holds a 29-28 head-to-head edge against Nadal, who holds 20 major titles.

But Nadal leads 7-1 at the French Open, including a victory in last year’s final. He has 13 French Open titles compared to one for Djokovic.

Play has resumed amid total silence between Novak Djokovic and Matteo Berrettini after the match was suspended because of a pandemic-related curfew set at 11 p.m.

Fans were expected to leave at 10:45 p.m. but many did not which meant play had to be interrupted for just over 20 minutes on Court Philippe-Chatrier.

Play has been suspended during the fourth set of the quarterfinal between Novak Djokovic and Matteo Berrettini to impose a pandemic-related curfew set at 11 p.m.

Fans were expected to leave at 10:45 p.m. but many did not and even started chanting “we’ve paid, we’ll stay." Some even jeered those who left.

Djokovic was up 2-1 in sets and leading 3-2 when play was halted on Court Philippe-Chatrier.

At 10:55 p.m. both players packed their bags and walked off down the tunnel while fans jeered and one shouted out “Rip-off!”

Within a few minutes the main stadium was almost completely empty.

Matteo Berrettini has won the third-set tiebreaker 7-6 (5) against Novak Djokovic in their quarterfinal at Roland Garros.

Djokovic won the first two sets and led the tiebreaker 5-4 but fluffed a forehand and backhand into the net to give the ninth-seeded Berrettini a set point.

The ninth-seeded Italian converted it to pull a set back at close to 10:30 p.m., only 15 minutes before fans were expected to leave because of a coronavirus curfew set for 11 p.m..

The chair umpire was roundly jeered on Court Philippe-Chatrier when reminding the fans they had to leave in 15 minutes.

There is quite an atmosphere on Court Philippe-Chatrier for the quarterfinal between 2016 champion Novak Djokovic and Matteo Berrettini.

Pandemic-related restrictions were loosened to allow 5,000 fans inside rather than the 1,000 for the previous matches.

That meant the main stadium at Roland Garros was filled to a third of its capacity but one entire top section was left empty behind one of the baselines.

After being away from live entertainment for so long, some fans made themselves heard a little too much.

Chair umpire James Keothavong had to tell them to be quiet a couple of times when they were getting rowdy and even jeering as Djokovic served.

The 18-time Grand Slam champion has a lot of supporters, however, and there were some Serbian flags on display.

Other fans shouted similar encouragement in Italian ("Andiamo!) and French ("Allez, Matteo!) for Berrettini when he was trailing 5-2 in the second set.

Rafael Nadal dropped a set for the first time at this year's French Open but ultimately advanced to the semifinals for a record-extending 14th time.

Nadal was down 4-3 in the third set but won nine games in a row to seal the match.

Nadal will be up against either top-ranked Novak Djokovic or ninth-seeded Matteo Berrettini in the semifinals.

The 10th-seeded player from Argentina leveled their quarterfinal match by winning the second set 6-4 after losing the opener 6-3. Schwartzman is the first player to take a set against the 13-time champion this year.

Both Anastasia Pavlyuchenkova and Elena Rybakina ended the day in the losing column this time.

A day after Pavlyuchenkova came from a set down to beat Rybakina and reach the French Open semifinals, the doubles teammates were back on the same side of the court at Roland Garros.

Pavlyuchenkova is the first Russian woman to reach a Grand Slam semifinal since Elena Vesnina reached the last four at Wimbledon in 2016.

Coco Gauff says she “definitely” plans to compete at the Tokyo Olympics after earning a spot on the U.S. team with her run to the French Open quarterfinals.

The 17-year-old Gauff said she doesn't have any concerns about going to Japan for next month's Tokyo Games.

She also acknowledged she hasn't “really thought about it yet.”

The Olympics were postponed last year because of the pandemic and there are concerns now about the coronavirus in Tokyo. Some tennis players have expressed reservations and French Open semifinalist Tamara Zidansek said she will not participate in the Olympics for Slovenia.

The WTA and ATP rankings after the French Open ends Sunday will help determine which players are eligible to compete in Japan.

Each country can send up to four men and four women to compete in singles and Gauff's career-best Grand Slam showing in Paris moved her into position to go to the Olympics.

She was asked about the Tokyo Games after her quarterfinal loss to Barbora Krejcikova at Roland Garros on Wednesday. She says “I’m definitely planning on playing the Olympics. ... I’m excited to play.”

Sakkari had never progressed past the fourth round at any major tournament before starting her Roland Garros campaign.

She returned extremely well on Court Philippe Chatrier and hurt her rival by taking risks.

Swiatek entered the match having not lost a set in the tournament. She asked for a medical timeout after going down 2-0 in the second set and returned to the court with her right thigh bandaged.

Iga Swiatek’s 22-set winning streak at the French Open is over.

The defending champion has lost the opening set of her quarterfinal match against Maria Sakkari 6-4 on Court Philippe Chatrier.

She had won 14 consecutive sets last year at Roland Garros and her first four matches this year were straight-set victories.

In the second set Swiatek was broken immediately and went down 2-0 before calling for a medical timeout.

Swiatek has been enjoying a smooth ride to the quarterfinals and has yet to drop a set.

The 33rd-ranked Krejcikova will play her first semifinal at a major tournament against either defending champion Iga Swiatek or Maria Sakkari.

Gauff had plenty of chances in the first set but failed to convert five set points. She saved five match points but her comeback attempt was too little too late after falling behind 5-0 in the second set.

Krejcikova extended her winning streak on clay to 10 matches.

“I really never imagined that I would be standing here one day," she said. “It's something I never dreamed of."

American teenager Coco Gauff is bidding for a spot in the French Open semifinals against Barbora Krejcikova of the Czech Republic.

If she wins on Court Philippe Chatrier, the 17-year-old Gauff will become the youngest woman in the semifinals at any major tournament since 2006.

The 24th-seeded Gauff has not been defeated by a player outside the top 30 on clay this season. Krejcikova is ranked 33rd.

In the men’s quarterfinals, 13-time champion Rafael Nadal faces No. 10 seed Diego Schwartzman, before No. 1 Novak Djokovic meets No. 9 Matteo Berrettini in the night session.