The Latest: Raducanu, 18, surges into US Open quarterfinals 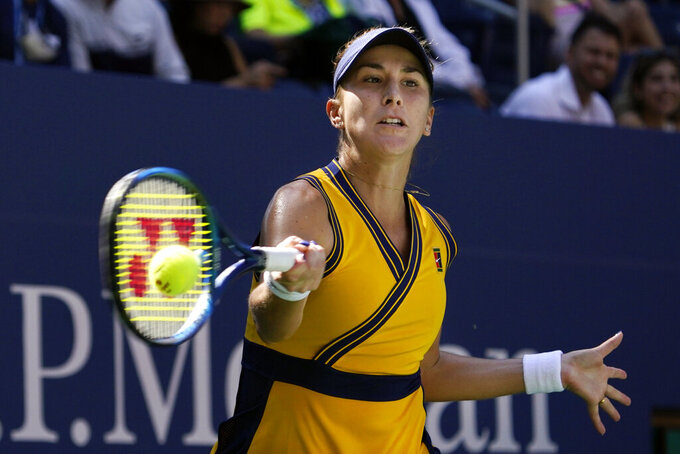 Belinda Bencic, of Switzerland, returns a shot against Iga Swiatek, of Poland, during the fourth round of the US Open tennis championships, Monday, Sept. 6, 2021, in New York. (AP Photo/Elise Amendola)

Emma Raducanu has gone all the way from the U.S. Open qualifying rounds to the quarterfinals.

Raducanu reached the fourth round at Wimbledon and has gone a step further in the year’s last Grand Slam tournament, becoming just the third female qualifier to reach the U.S. Open quarterfinals in the professional era.

Rogers, who upset No. 1 seed Ash Barty in the last round, jumped to a 2-0 lead before Raducanu won the next 11 games.

Alexander Zverev is into the U.S. Open quarterfinals with his 15th straight victory.

Zverev started his winning streak at the Olympics, where he beat top-ranked Novak Djokovic in the semifinals en route to the gold medal.

Djokovic is in action later Monday.

Belinda Bencic is back into the quarterfinals of the U.S. Open.

The Olympic gold medalist from Switzerland beat Iga Swiatek 7-6 (12), 6-3 to make the last eight in Flushing Meadows for the third time.

Bencic was a semifinalist at the U.S. Open in 2019, the last time she played. She also reached the quarterfinals in her debut in 2014.

Swiatek, the No. 7 seed from Poland who won last year's French Open, was the only women's player to reach the fourth round in every major this year.

Novak Djokovic is back at the stage of his loss at the U.S. Open last year.

It was in the fourth round last year at Flushing Meadows that Djokovic was defaulted for accidentally hitting a line judge in the throat with a tennis ball after dropping a game in his match against Pablo Carreño Busta.

After then losing to Rafael Nadal in the French Open final, Djokovic has gone on to win all three major tournaments this year, a 24-match winning streak in Grand Slam play. He will become the first man to win all four in the same year since 1969 if he wins the U.S. Open.