The Latest: USA Luge to look for recruits only in New York 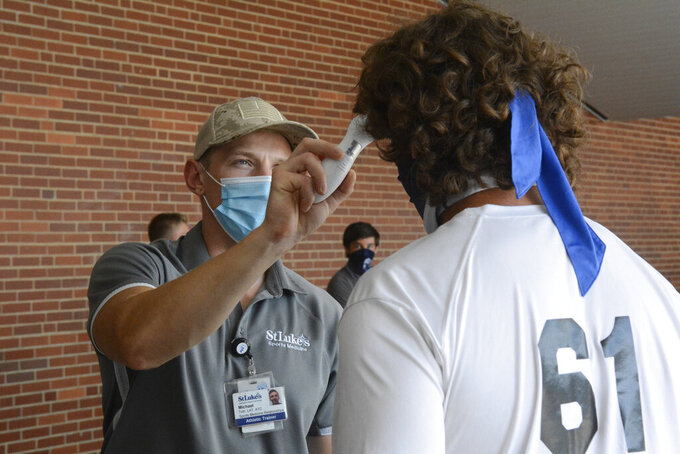 USA Luge has changed plans and is restricting its slider search strictly to New York state.

This year’s schedule featuring sleds on wheels started later than usual as a result of the coronavirus pandemic. The next clinic is on tap for this Sunday in Lake Placid for boys and girls ages 9 to 13.

Sessions are limited to 10 youngsters to accommodate social distancing rules and face masks are mandatory. All sleds, helmets and registration items will be disinfected after each use.

Other stops are set for Sept. 12 in Utica, Sept. 13 in Glens Falls, Sept. 26-27 in metro New York City, and Oct. 4 back in Lake Placid. At all locations the organization will deploy new cleaning and sanitizing protocols to keep participants safe.

The original schedule had clinics scheduled in Duluth, Minnesota, and Columbus, Ohio.

Athletic department officials are projecting they could face a budget shortfall in excess of $50 million.

As a result, the Boilermakers other head coaches and assistant coaches will voluntarily take 15% pay cuts, while other staff members are facing reductions in force, reduced work schedules, furloughs or salary cuts ranging from 5% to 50%.

In addition to the salary cuts, Brohm, Painter, Versyp and Bobinski have agreed to donate $1 million to the school’s More Than A Game on Sept. 9 as part of the school’s day of giving campaign.

Purdue is one of the few in the Football Bowl Subdivision that does not receive money from taxpayers, the school’s general fund or student fees and it is trying to make up at least some of the projected losses through donations.

USA Diving has announced it will hold next year’s Olympic Team Trial s from June 6-13 in Indianapolis.

The trials were initially set for June 14-21, 2020 in Indy but were rescheduled when the Tokyo Olympics were postponed by the COVID-19 pandemic.

The Indiana University Natatorium has hosted the Olympic Trials six times since 1984, most recently in 2016. USA Diving headquarters also are located in Indy.

A full competition schedule can be found on USA Diving’s website.

Masks will be required on Oklahoma’s campus on football game days and tailgating will be prohibited during the football season in response to the COVID-19 pandemic.

The school made the announcements in a news release on Tuesday.

The mask requirement includes all campus buildings and outdoor areas, athletics facilities, parking areas, outside the stadium, gate entry, concourse, stadium seating bowl and the club/loge areas. The masks may be removed temporarily for eating and drinking while in the stadium seating bowl, or in common areas of clubs, suites and loges.

Although the school has no authority over off-campus tailgates, it encourages people to wear face masks in public and to avoid congregating in large groups that impede social distancing.

North Carolina says the rest of its winter and spring sports teams may resume activities Wednesday after a recent pause amid the coronavirus pandemic.

The school announced over the weekend that football, men’s and women’s basketball, and other fall sports were cleared to resume workouts as of Sunday. But they said all other sports remained on hold for the time being.

Last week the school had paused activities amid rising numbers of coronavirus cases on campus, including in student housing and a fraternity. Those cases had led the school to cancel in-person undergraduate classes in favor of remote instruction.

Vanderbilt is getting its top tackler back after Dimitri Moore changed his mind about opting out of this season.

Moore posted on Instagram on Tuesday that he decided to opt out of the upcoming season after his grandfather died of COVID-19. The senior from Cedar Hill, Texas, wrote that he has done more research and talked with doctors and medical personnel since that decision. Moore says he is returning to the Vanderbilt football program, a decision he made on his own.

The linebacker says he trusts and has confidence in Vanderbilt’s testing abilities and safety protocols.

Vanderbilt canceled football practice last Friday and has yet to return after what the university called “a small number” of positive COVID-19 test results in the program. The football players who tested positive were put in isolation.

The Buffalo Bills will play their first two home games without fans present, while not ruling out the possibility of allowing some into the stadium before season’s end.

The Bills announced the decision on their Twitter account Tuesday following discussions with state and county health officials. The team said it is still attempting to establish policies and procedures “that hopefully permit fans later this season.”

State guidelines remain unchanged since June, when New York approved the resumption of pro sports but without spectators present.

The Bills have offered season ticket holders the option of refunds or pushing that money to next year. Those who keep money in their account would be eligible to be included in a lottery should fans be allowed.

The announcement comes a day after Bills coach Sean McDermott described the lack of league-wide uniformity regarding the presence of spectators at NFL games as being “ridiculous” after AFC East rival Miami announced it would allow up to 13,000 fans into its stadium.

The San Francisco 49ers will play their season opener without fans in attendance because of the COVID-19 pandemic.

The team said Tuesday after consulting with local officials that the Sept. 13 game against Arizona at Levi’s Stadium will be played without spectators.

The team said it would work with state and county officials to determine whether it will be safe to allow fans to attend games later this season.

The Turkish soccer federation says a limited number of spectators will be allowed into stadiums to watch games as of October as it relaxes coronavirus restrictions.

The federation says stadiums around the country would operate at a maximum of 30% capacity.

The spectators would have their temperatures taken before being admitted. They would be required to wear masks and keep to social distancing rules.

The decision comes despite an uptick in in the number of confirmed coronavirus cases in the country. Daily infections have jumped to more than 1,000 since Aug. 4 to reach levels previously recorded in June.

The Minnesota Vikings will play at least their first two home games without fans in attendance.

With current Minnesota Department of Health guidelines specifying an indoor venue capacity of 250 people, officials from the Vikings, the state, U.S. Bank Stadium, the NFL and the city of Minneapolis were unable to establish a prudent way to open the gates to the public for now.

The Vikings will host Green Bay on Sept. 13 and Tennessee on Sept. 27 with the 66,000 seats empty. Over the ensuing five weeks, Minnesota plays at home only once, on Oct. 18 against Atlanta.

In a statement, the Vikings said: “We have sought to balance the opportunity to provide fan access with the responsibility to adhere to public health and medical guidance in order to maintain the health and safety of fans, players, staff members and the broader community. Ultimately, public health is our top priority.”

NFC North rivals Green Bay and Detroit have announced their first two home games will be played without fans. Chicago also will start the season without spectators but has not specified for how many games.

Tennessee will be selling tickets for approximately 25% of the seats at Neyland Stadium for this season.

The stadium has a capacity of 102,455, counting everybody in the building, which could mean around 25,000 fans

The Volunteers’ first home game is Oct. 3 against Missouri and university officials say restrictions could change during the season based on statewide virus data and recommendations from public health officials. Tennessee asked fans statewide to wear masks in public.

Athletic director Phillip Fulmer says he empathizes with the thousands of fans who won’t get to go to games in Neyland this fall. Fulmer says the circumstances are beyond the control of Tennessee officials and they will do their best to create the safest environment both inside and outside the stadium.

The original prices for season tickets will not change with Tennessee set to host five Southeastern Conference opponents for the first time since 1959.