Mastro maps out halfpipe trick that just might win Olympics 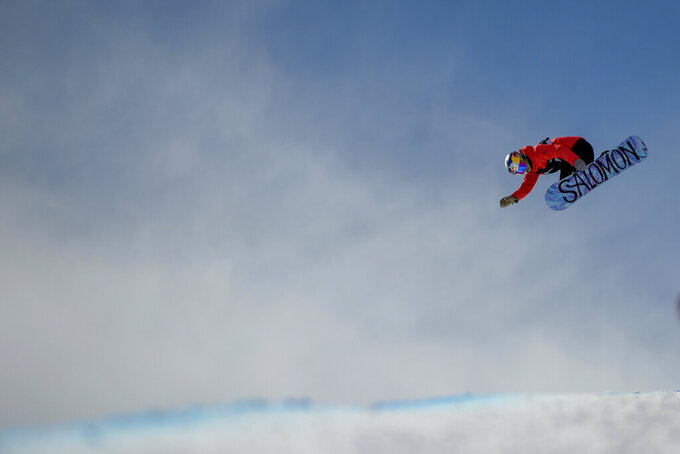 FILE- Maddie Mastro, of the United States, competes in the women's snowboard halfpipe final at the freestyle ski and snowboard world championships, Friday, Feb. 8, 2019, in Park City, Utah. Mastro has sketched out a trick in her notebook that just may help her land on the podium at the 2022 Beijing Games, maybe even on the top step. It's called the front double 1080 and includes two flips and a 360-degree rotation with a backward landing. (AP Photo/Alex Goodlett, File)

ZHANGJIAKOU, China (AP) — The red, faux-leather notebook snowboarder Maddie Mastro carries with her contains detailed entries of ideas and concepts for the halfpipe.

On one of those pages are the inner workings for the front double 1080 — a wish-list trick the 21-year-old American had only sketched out on paper. That is, until recently when she put those thoughts into action.

If anyone is going to topple defending Olympic champion Chloe Kim in China this week, it could very well be Mastro. It could very well be with a run that includes that version of her trick, which is two flips and a 360-degree rotation with a backward landing.

Hit that, and the gold just might belong to Mastro. But in her eyes, it's more about progression than podiums. Hence, the detailed notebook.

“How I approach my snowboarding and my contest snowboarding is I never want to base my run or success off of one trick,” said Mastro, who begins Olympic qualifying on Wednesday, with the final set for the next day. “I want my whole run, top-to-bottom, to speak for itself. I don’t want to put that trick on that pedestal.”

Because really that trick was just next up in her journal titled “Notes." Some entries in there are basic thoughts (different grabs on the snowboard). Some are detailed reports (what worked well, what perhaps needs fine-tuning). And some are wish-list tricks — outlandish ones she's always wanted to try.

Make no mistake: This trick is for her and only her. If it closes the gap on Kim, so be it. It's only to try something new.

But the outcome could be similar to what Shaun White achieved in 2010 when he debuted his “Tomahawk” — a Double McTwist 1260 — on his way to gold. Or when the “I-Pod” (Iouri Podladtchikov) busted out the “YOLO," a brand-new spin with 1440 degrees of spin that he used to beat White in 2014.

Triple corks could win the Olympics for the men this year. Mastro's front double 1080 might win it for the women.

“Let’s ask the judges,” she said on whether her trick may be good for a gold medal. “If I land it, that’s what I can control, and then the rest is up to the judges. I mean, you can land the best run and the judges could be like, ‘Meh, we didn’t think it was the best that day.’”

This trick comes from an idea she’s had stenciled out for a while. But in training camp three months ago in Saas-Fe, Switzerland, she woke up one day and decided it was time.

First, she made three attempts into an airbag, just to see how it felt.

“On the last one I did I was like, ‘That’s it. We’re good. We’re done with the bag,’” she explained. “And then it was just a matter of when I decided to do it in the halfpipe from there.”

About four days later, she went for it in the halfpipe. And on her fourth try, she nailed it.

“When I took it to snow, it was a very natural thing for me because all it took was just like committing to the landing,” Mastro said.

She’s studied the trick thoroughly. Like the way White or any members of the U.S. team execute it, because the jump is a staple on the men’s scene. Or how Australia’s Scotty James approached it, because his was textbook.

“I would watch (Scotty's front double 1080) and break it down in parts where I needed help with,” Mastro said. “I would be like, ‘OK, how does he do the landing? Where are his eyes looking?'"

She has yet to try it in a contest. In the halfpipe at Genting Snow Park, she may just go for it.

Or maybe not. All depends on elements, feel and mood.

“As I’ve gotten older, I’ve learned to pull from my bag of tricks depending on the day and what’s going on,” said Mastro, who finished 12th in the halfpipe at the 2018 Pyeongchang Games. “What’s working, what’s not not working, and creating a run from that. I don’t try to base any run off one trick. I want to be able to pull from my bag and create a run that’s going to work for the day and just work for how I’m feeling.”

And she can always change her mind.

“That happens a lot and that’s just like a risk-management thing,” she explained. “If I’m going to slow on a snowy day and I know I don’t have the amplitude for whatever I’m about to do, you can 100% make an executive decision, I guess, to not do that.

“Ideally, you’re sticking with the plan and doing it.”

There are other wish-list tricks in her notebook. Her sport revels in progression, and she'd like to be one who takes it to a new level.

"I do have those tricks that might not happen next month, they might not happen in a year, but they’re there and there’s some big ones on there, but I’m not going to limit myself with that.”